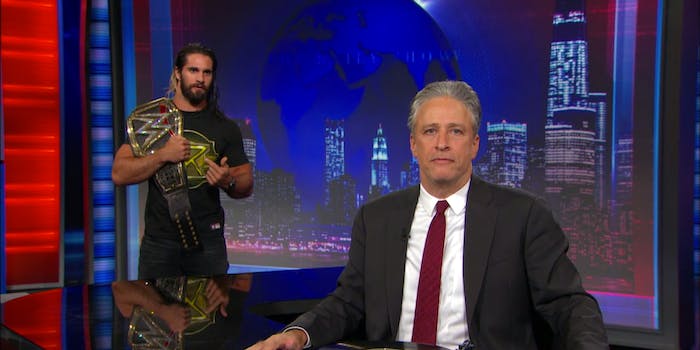 A short history of celebrity cameos on the WWE

Jon Stewart is far from the only celebrity to show up during a WWE show.

We’re already feeling the lack of Jon Stewart in our lives, but his next gig guarantees we’ll see him again very soon.

The WWE announced Monday that Stewart would be hosting its SummerSlam this Sunday, a four-hour broadcast that will bring about a rousing rematch of the Undertaker and Brock Lesnar.

Stewart, of course, famously called out WWE’s Seth Rollins after Rollins said he could host The Daily Show better than Stewart could. They faced off during an episode of Monday Night RAW, where Stewart kicked Rollins in the balls.

Rollins showed up last month to call him out for his “corporate shilling.” Although Stewart’s run on The Daily Show is over, chances are they’ll reference their feud yet again during Sunday’s broadcast.

Essentially, by confirming that Stewart was a “longtime member of the WWE Universe” in an official blog post, WWE made Stewart canon. It might just be on the same level as Stephen Colbert receiving Captain America’s shield after his death.

But Stewart is far from the only famous person to be part of the WWE Universe. Pro-wrestling is, at its finest, pure entertainment, and everyone wants to take part. Some people assume the mantle of host, but others are willing to get their hands dirty, one way or another, to ultimately become part of the canon themselves. Here are seven of our favorites.

If elected, Donald Trump would become the first president to be inducted into the WWE Hall of Fame. (Yes, really.) But before that honor was bestowed upon him, he and current WWE chairman Vince McMahon got into a billionaire’s tiff in 2007 at WrestleMania 23 and decided to duke it out in the ring in a match with hair-raising stakes: The loser would get his head shaved.

To think, we almost got to see what Trump looked like without hair.

The Arrow star and longtime Hulkamaniac is set to take on Stardust and King Barrett with Neville at SummerSlam on Sunday, but like Stewart, it’s a smackdown months in the making: Stephen Amell and Stardust had a tense staredown and got into a social media fight, as you do with modern-day beefs.

Stardust and King Barrett may have the upper hand in the ring, but don’t count Amell out: He’s trained in parkour and does his own stunts on Arrow.

William Shatner has made multiple appearances in WWE shows over the years, but his greatest one might’ve been putting his vocal abilities on display to sing a bunch of famous wrestlers’ entrance songs.

Don’t pity him. The actor ended up in the ring with former WWE pro-wrestler Hulk Hogan and defeated Roddy Piper and Paul Orndorff at the very first WrestleMania. A year later, he faced off against Piper again.

Former basketball player Shaquille O’Neal found himself as a ringside enforcer during an episode of WWE Raw, but after the match things got tense between him and the Big Show.

Ahead of the Grumpy Cat’s terrible Lifetime movie last year, the Miz tried to pitch the curmudgeonly feline some ideas for a Hollywood film. She wasn’t into them at all—or maybe she just wanted a nap. It’s kinda hard to tell.

Arnold Schwarzenegger is an actor and body builder by trade, so it doesn’t surprise us that he can also hold his own during a fight with Triple H.