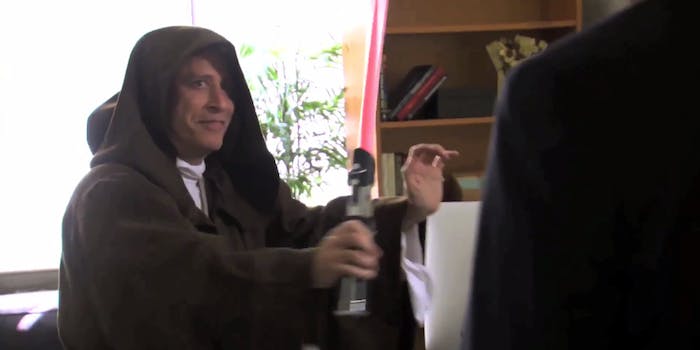 They're both ready to die for the opportunity.

Jon Stewart and Stephen Colbert are fighting to the death for the title of the world’s biggest Star Wars fan.

Back in May, Star Wars: Episode VII director J.J. Abrams showed a glimpse of the set and offered the fans the chance to win a role in the movie by donating to Star Wars: Force for Change, a charitable effort that will support UNICEF’s Innovation Labs.

Colbert and Stewart, both geeks in their own right, have gone head-to-head on their respective shows before, but this time around they can barely keep straight faces as they face off with cosplay and obscure trivia. There’s plenty of nods to the original source, and it has a great starting point for fanfiction writers.

Can we just give them both roles in Star Wars?