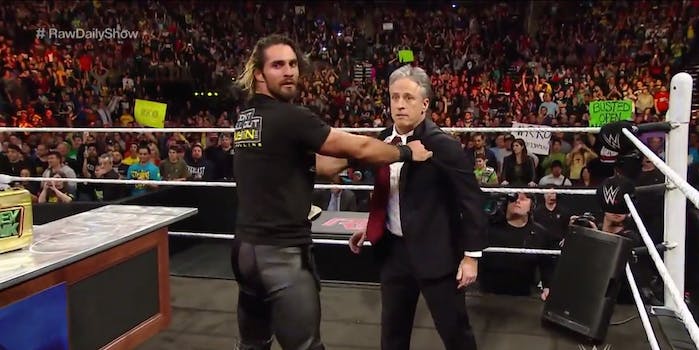 Their public feud comes to a screeching halt on live TV.

After plenty of back-and-forth, Jon Stewart finally took on WWE wrestler Seth Rollins on his own turf.

The public feud started around the time that Stewart announced his retirement from The Daily Show. Rollins claimed on Monday Night Raw that he could easily take over Stewart’s job and make the Comedy Central program “watchable.” Even though Stewart is now a lame duck of late-night, he couldn’t take that insult lying down.

The feud escalated last Thursday when Rollins interrupted Stewart’s “Moment of Zen” and challenged him to appear on the next Monday Night Raw.

And so Stewart showed up, but not before Rollins took some digs at Stewart at the anchor’s desk first. With the audience watching, they took turns insulting each other. Boundaries are pushed, feelings are hurt, and Stewart delivers the knockout blow seen around the world, delighting both wrestling fans and skeptics.

Sure, the whole thing was probably scripted and expertly executed, but we can’t help but watch and laugh anyway.