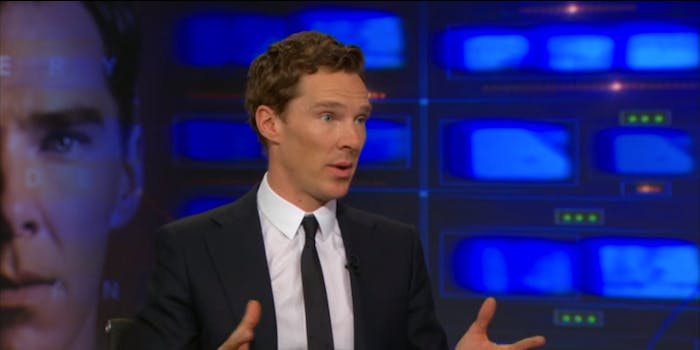 He can't keep his feelings bottled up inside.

Jon Stewart is a consummate professional, but Benedict Cumberbatch somehow got him to act like a total fanboy.

When Cumberbatch went on The Daily Show on Tuesday night to promote his new film The Imitation Game, Stewart had to gush over the actor’s charm and talent. In between serious discussion about Cumberbatch’s character Alan Turing and the real-life story behind the movie, Stewart essentially outed himself as Cumberbatch’s number-one fanboy among TV hosts. Listening to Cumberbatch intelligently discusss Turing and what makes us human only deepened Stewart’s love for him.

“I have a lot of guests on the show,” Stewart said. “You’re the first guest where… I want to rip your clothes off and sell it on eBay.”

Kim Kardashian might not have broken the Internet, but if Cumberbatch struck a similar pose, Stewart suggested, the actor just might do it.

H/T The Hollywood Reporter | Screengrab via The Daily Show