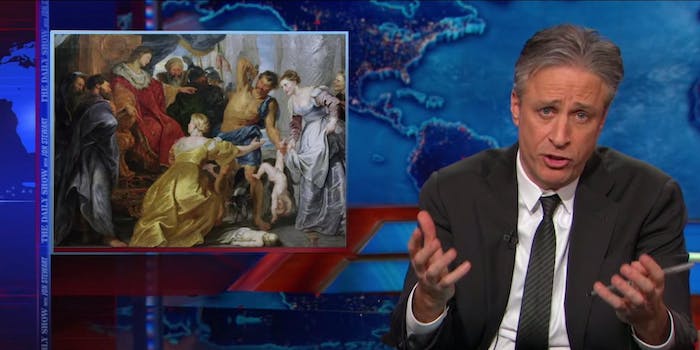 After 15-plus years behind the desk, Jon Stewart is stepping down from The Daily Show.

Early reports Tuesday cited audience members who had been in attendance to hear Stewart’s announcement during The Daily Show’s Tuesday taping.

Got to be present when the great @TheDailyShow Jon Stewart announced his retirement. #OneOfTheGreats #JonStewart

It didn’t take long for Comedy Central to confirm the news, effectively ending hours of speculation leading up to Tuesday night’s broadcast. Comedy Central President Michele Ganeless praised Stewart in her statement, saying that “his comedic brilliance is second to none.”

Stewart will step down later this year, although he has yet to announce his final show. People are already choosing to commemorate the longtime host, along with ample suggestions for his replacement.

Jon Stewart has been, among many other things, one of the finest media critics of this era.

my timeline is perfect

Jon Stewart has done more to engage next generation in the news than any other single person.

reminder: jon stewart is not dying

Long-time host of @TheDailyShow Jon Stewart retiring this year, likely to pursue dream of being a @WWE Superstar. pic.twitter.com/yABGjiZnWF

His announcement comes in the midst of a late-night shift. Stephen Colbert just ended his reign at The Colbert Report back in December. Larry Wilmore took over Colbert’s time slot with The Nightly Show. Craig Ferguson left The Late Late Show in December. David Letterman is set to retire in May.