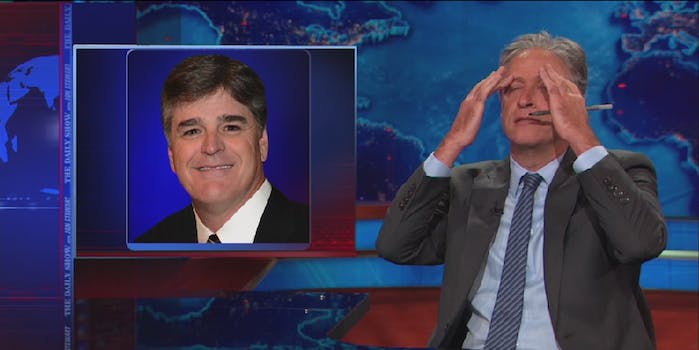 "You’re tired of hearing about it? Imagine how f**king exhausting it is living it."

Jon Stewart returned to The Daily Show in fine form last night, taking on Fox News for its questionable characterization of the shooting of Michael Brown and the protests in Ferguson, Mo., that have followed.

After a cold open that featured Stewart taking the “Ferguson Challenge”—that is, getting sprayed with mace—the host began the show by highlighting the ways in which Fox anchors and guests tried to deflect from the real issue of racial disparities in policing at the heart of the Ferguson story.


Stewart played a montage of conservative commentators making allegations about “the race card,” which ended with one man who said, “You know who talks about race? Racists.”

Stewart’s reaction was predictably perplexed. “Did you just ‘He who smelt it, dealt it’ racism?” he asked faux-incredulously.

To hit home his point, Stewart told a story about Daily Show correspondent Michael Che, who is African-American, being stopped while entering a building “in this liberal bastion” of New York City. The white producer who accompanied Che entered without incident, even though he was “dressed in what could only be described as homeless elf attire and a pretty strong five-o’clock-from-the-previous-week shadow,” according to Stewart.

Che, meanwhile, was “dressed resplendently in a tailored suit.”

“That s**t happens all the time, all of it,” Stewart said right before going to a commercial break. “Race is there, and it is a constant. You’re tired of hearing about it? Imagine how f**king exhausting it is living it.”

The next segment after the break featured Che reporting from different locations as he tried to escape cities with a history of racially tinged police brutality. The segment ended with Che in outer space.

“Nowhere safer for a black man than the infinite blackness of outer space,” Che said, right before the disembodied voice of a police officer (played by correspondent Jason Jones) accosted him.