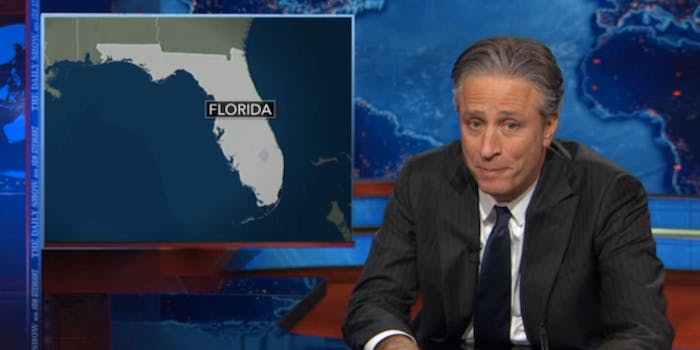 With some county courts in Florida declining to marry any couples rather than accept a ruling in favor of same-sex marriage—a decision that sparked a wave of anti-gay protests—The Daily Show’s Jon Stewart mocked the state as a “mugshot factory” full of moral hypocrites.

Nobody living in a place notorious for local news items about people setting cars on fire over McDonald’s desserts and assaulting pet store employees with exotic reptiles, Stewart argued, can reasonably claim that the recognition of homosexuals’ civil rights is a threat to civilization. And yes, he has the “Florida Man” montage you’ve always dreamed of.

The best part? Stewart’s guest last night was Senator Marco Rubio (R-Fla.), who last year lamented a “growing intolerance” for those who oppose gay marriage. “You don’t plan to go to Florida anytime soon,” Rubio said as he sat down for the interview. “You’re a candidate for a lizard-beating.” It was probably just a joke, but we wouldn’t take that chance, Jon.