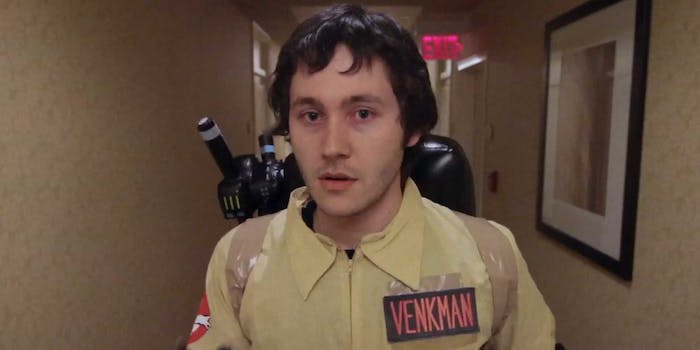 Jon Marco chases a girl through every classic ’80s movie

Sometimes life feels like it's just one big '80s movie. For Jon Marco, that's the premise of his newest music video.

Man loses his dream girl, spends ages chasing her, and then eventually gets to step up and save the day.

It’s a loving homage to the classic ’80s films we still watch today. Note the characters’ outfits, the background settings, the sound of the music, the scenery.

Originally channeling Marty McFly, he wakes up to find Rhianna leaving his room with a Hoverboard. Luckily for him, he has one of his own.

In the process of chasing her down with the Hoverboard, a bicycle, a trampoline jump, and a series of sock slides, Marco manages to duplicate some of the most iconic scenes from 19 different ’80s movies.

Some of the references don’t make sense in the context of the video, but we still love the nostalgia attached to it. For example, there’s no real reason to have Marco come out of a pool in a red bikini or lift Rhianna in a lake, but we let it slide since it’s from Fast Times at Ridgemont High and Dirty Dancing.

The Back to the Future trilogy is the connecting thread. Referenced at three different points throughout the video, Marco also channels Marty McFly with a guitar riff of “Johnny B. Goode” and George McFly when his lady needs rescuing.

Like most ’80s movies, the video manages to have a happy ending: Marco finally saves Rhianna from the hands of Biff Tannen just in time to attend the Enchantment Under the Sea dance.

He must have remembered his childhood motto: Goonies never say die.