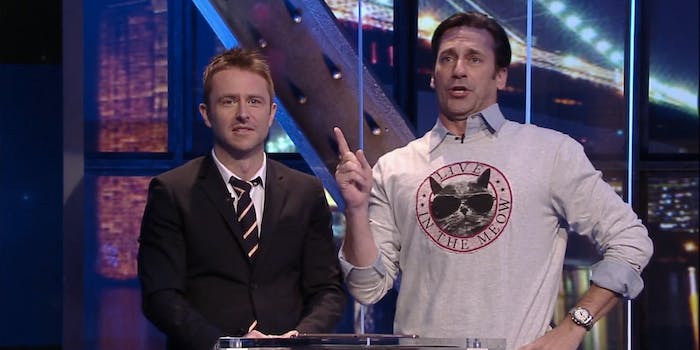 We didn't think it was possible.

Hang on to your nine lives, because you’re going to need them: Jon Hamm recently appeared on Comedy Central staple — and comedy nerd favorite – @midnight. He did not disappoint. How could he? Jon Hamm loves cats. Onstage with the likes of comedians Nikki Glaser, Judah Friedlander, John Mulaney, as well as host Chris Hardwick better known — well, depending on one’s definition of “known”– as The Nerdist, Your Imaginary Boyfriend Mr. Hamm simultaneously brought down the house and the Internet with the effusive declaration of his very real love for cats.

In five short minutes, Hamm crashed the stage in an impossibly meme-ready sweatshirt that read “LIVE IN THE MEOW,” complete with a photoshopped image of a cat wearing sunglasses; displayed intimate knowledge of a semi-famous Tumblr known as Bodega Cats; scored brownie points with the audience for poking fun at Don Draper, his iconic character on Mad Men; and generally made everyone angry that they are not Hamm’s long-term love Jennifer Westfeldt. Or a cat with a 401k. Which, according to The Gospel of Hamm, fully exists.

Watch the appearance below: