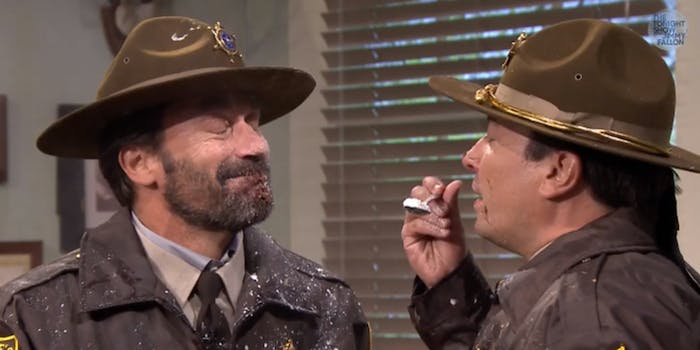 Watch Jon Hamm and Jimmy Fallon spit food on each other

That’s a whole lot of dairy in the face.

Last night on The Tonight Show, Jimmy Fallon and Jon Hamm took turns spitting on each other.

There’s no bad blood between the two, though. Fallon was simply reminiscing about the TV show the two did together, back in the ‘80s, called Palisades Park Pet Patrol. And even though their long-lost buddy comedy ostensibly involved them being employed by animal control, the whole bit revolves around how many spittakes they can do with mouths full of pretzels, pumpkin pie, and alliteration.

Of course there’s a second clip. That’s a whole lot of dairy in the face.