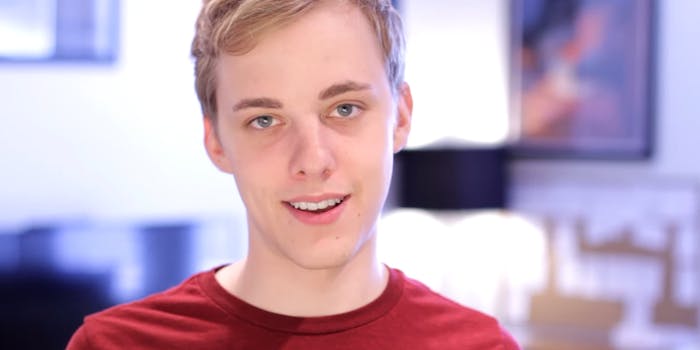 He takes his high production value sensibilities to 99 seconds or less.

Jon Cozart, the University of Austin film student who amassed a 2.4 million subscriber following on YouTube with a few well-done Disney parodies, is branching out beyond his Paint channel to explore more short-form creation.

Cozart’s new channel, PaintChips, will follow the video-a-week timeline (a solid increase from his current pace, which leaves months between videos) and deal with more personal and interactive content. Of course, Cozart isn’t completely abandoning stylized videos, and he’s adhering to a 99 seconds or less format to creatively answer fan questions and prompts, with the goal of connecting more with his fanbase.

“In my mind I’ve diluted YouTube to a creator/consumer exchange,” Cozart said in his announcement video. “When I look at all the content I watch from other YouTubers, I invest time time because I love what they do, and I love what I do because I love them. I want to be more like the creators I admire, the ones that inspired seventh-grade Jon to make videos in the first place.”

It’s a savvy move for Cozart, who may have the following, but thanks to his chosen format, has a limited ability to interact with his massive fandom like other creators who create a mixture of vlogs, challenges, and big production value videos on their channels. So far his first video on the new channel deals with a popular question Cozart receives, “Why are you so perfect?” Cozart reveals his perfect imperfection in a supercut of all the times he messed up while filming his new channel announcement video.

We’re looking forward to more from Cozart, and it’s clear his fans are too. The new channel may not be as large as his original, but it’s already ballooned to 174,000 subscribers in only five days.