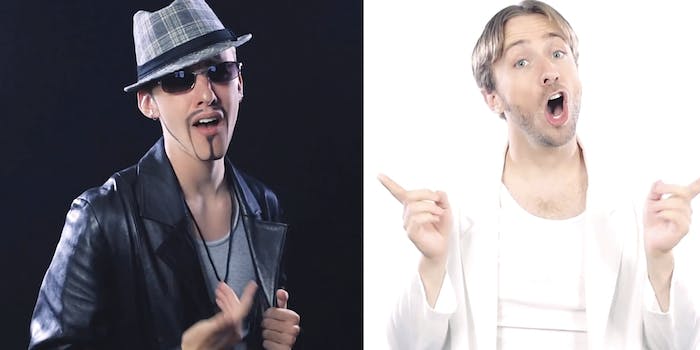 What happens to boy bands after the world says "bye, bye, bye"?

Jon Cozart is taking a break from Disney and going straight for the teenage jugular with a new parody music video skewering boy bands.

The master of exploring the dark side of what happens after “happily ever after” is putting those skills to use in his new video focused on what happens when fame fades for boy bands. In “Boy Brand,” Cozart is joined by fellow YouTube singer Peter Hollens to tell the tale of NSYNC, One Direction, the Jonas Brothers, and Backstreet Boys.

For NSYNC, things have fallen apart as they’ve aged. Meanwhile, the boys of One Direction might still be youthful, but they’re so perfect it’s like they were made in a factory. Jonas Brothers are ready to cast off the purity rings and smoke a bowl. And, of course, Backstreet Boys sing about their sixth or seventh comeback tour to date and their insistence that “Backstreet is here to stay.”

Beyond the song, Cozart and Hollens really have their boy band moves down pat. They each sport a variety of hairstyles, facial hair, and perfect poses seemingly copied straight from the boy band handbook. If this YouTube thing doesn’t work out, they could grab two more guys and start a successful mall tour, at least for a little while.