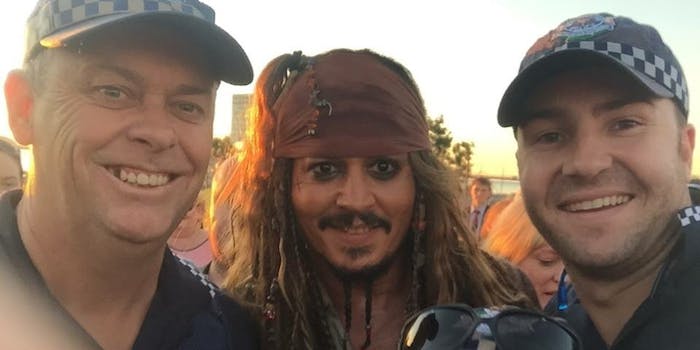 These Australian cops will always remember the day they they almost caught captain Jack Sparrow.

Johnny Depp‘s Jack Sparrow is swanning his way across Australia‘s Gold Coast while filming 2017’s Pirates of the Caribbean: Dead Men Tell No Tales, the fifth installment of the popular swashbuckling Disney franchise. For lucky local residents, that means waking up bright and early to catch a glimpse of Depp en route to the set.

And for Queensland police, it means snagging a potential new water cop.

The Queensland police service shared this selfie a few of their force grabbed with Depp while he was in costume as Captain Jack.

Depp and his wife, Amber Heard, have recently come under investigation by local authorities after their failed attempt to smuggle their dogs past customs resulted in officials threatening to kill the pets unless they were deported.

Depp must have thought the Australian biosecurity codes were more like guidelines.

Although an Australian Senate committee threatened Depp with up to 10 years of jail time for the stunt, he seemed to be on perfectly good terms with these local Queensland police. On Facebook, they captioned the photo with: “Here’s Johnny! A potential new Water Police recruit? Thanks for the selfie #JohnnyDepp“

Of course, there’s no way to know whether everyone involved in shooting the photo made it out of the experience with their valuables intact, but we’ll trust that everything was savvy.

Once a pirate, always a pirate.