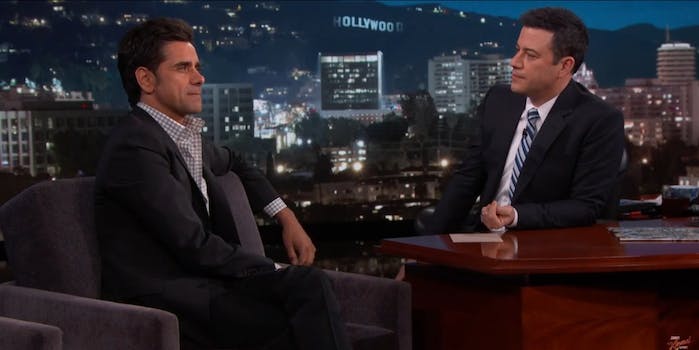 Want a 'Full House' sequel? You got it, dude!

John Stamos appeared on Jimmy Kimmel Live Monday night to share the news that everyone has been waiting to hear: the rumor is true and Full House is coming back.

Stamos, who played Uncle Jesse on the original series, told Kimmel that the new show, Fuller House, will be available exclusively on Netflix. The streaming site—which has seen tremendous success with exclusive programming like Daredevil, The Unbreakable Kimmy Schmidt, and Orange is the New Black—has ordered 13 episodes of the Full House sequel, including an hour-long introductory episode.

Admit it: you, too, would love to see Kimmel dressed up as an Olsen twin.

The original Full House ran on ABC from 1987 to 1995. It followed the life of widower Danny Tanner, who was raising his three children with help from his brother-in-law Jesse and best friend Joey.

The sitcom was a major success for the network, and it, along with fare like Family Matters, Step By Step, and Boy Meets World (which itself spawned a sequel series last June), was a cornerstone of ABC’s Friday night “TGIF” lineup. Full House made major stars out of John Stamos, Bob Saget, and twins Mary-Kate and Ashley Olsen, who took turns playing youngest daughter Michelle.