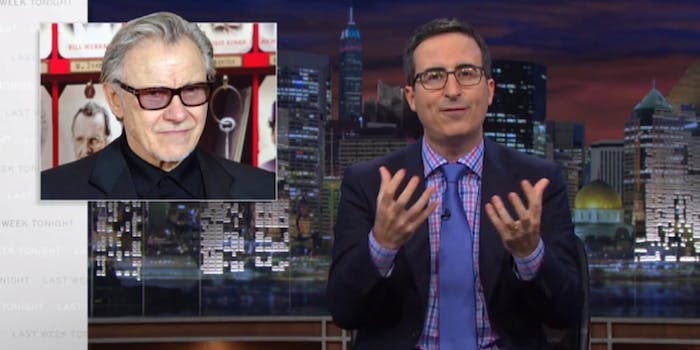 Drones are the "third most annoying thing in the sky after mosquitoes and plastic bags caught in the breeze."

Drones are everywhere right now. They’re also, according to John Oliver, the “third most annoying thing in the sky after mosquitoes and plastic bags caught in the breeze.”

Last night, he aimed his vitriol at America’s drone program, and the strikes reportedly launched at Waziristan and Yemen last week, which only one news outlet reported. But since drones are everywhere, what’s the big deal, right? Remember when Obama joked about using predator drones on the Jonas Brothers if they made a move on his daughters, and everyone laughed?

Oliver attempts to suss out the basics of how, why, and when the U.S. uses drone strikes, but he ultimately comes to the conclusion that “our rules for drone strikes are a little like Harvey Keitel’s balls. We’ve all seen them in The Piano, Bad Lieutenant, or on Snapchat. And from a distance, you think, ‘Oh, I understand the contours of those. But if you were to really examine them, you’d discover that they’re actually lost in a haze of fuzziness and gray areas.”

Even more frightening than involuntarily visualizing Harvey Keitel’s balls are the number of civilian casualties from drone strikes, and the fact that U.S. officials don’t have an accurate count, or even really know who they’re killing.

Oliver says the constant threat of drones overhead has to mess with your head. That’s an understatement.