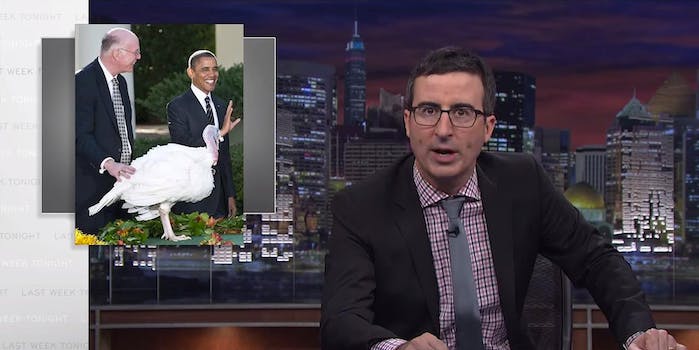 "Every single turkey is guilty—specifically, guilty of having delicious bird parts."

Turkey pardoning is a veritable American Thanksgiving tradition, so leave it to British expat John Oliver to point out how weird it really is.

In a web-exclusive clip to tide over fans of his late-night show Last Week Tonight, which is on break until next year, Oliver explained that he didn’t see the fairness in the president pardoning just one turkey every year while millions of other turkeys were slaughtered. (Many say the modern tradition began with President Harry S. Truman, but it has been around in some form since the presidency of Abraham Lincoln.)

Oliver had a suggestion to make things more fair: either all turkeys should be pardoned or they should all be put on trial. Such a trail, he said, would be a fast one, as all these birds are of one thing (being delicious) and should be punished accordingly.