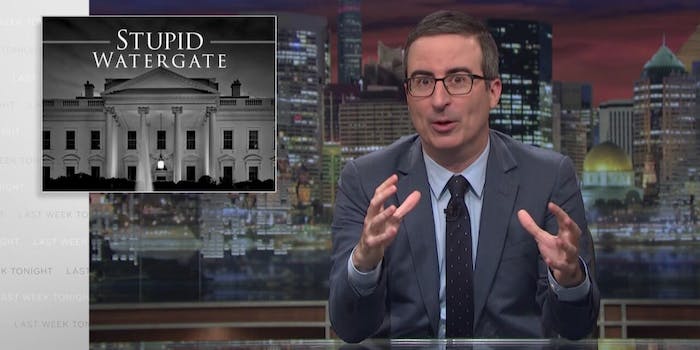 Spoiler: it's a lot.

John Oliver used most of Last Week Tonight to do something that—despite his show’s title—he hasn’t done all that much: attempt to explain what had happened in the last week.

So much has happened, Oliver pointed out, that it was easy for some people to forget bombshell reports released only a few days ago. The revelation that Donald Trump revealed highly classified information to Russians at the White House was from Monday.

Since then we’ve learned more about James Comey’s interactions with Trump (including reports of the memos Comey kept), new information on the FBI’s investigation into Michael Flynn, the appointment of a special counsel to handle the Russia investigation, what Trump said to the Russians about it, and a report that a White House official is now being considered a person of interest. The Russian probe is turning into a possible investigation of a cover-up, which Oliver dubbed “Stupid Watergate.”

“A scandal with all the potential ramifications of Watergate, but everyone involved is stupid and bad and everything. And given the exhausting pace of this week’s events, tonight we are simply going to try and answer a few basic questions. What the fuck is going on? How big a deal is this? Where do we go from here? And is this real life?”

The past week has led to more members of Congress calling for impeachment, but even with everything that’s happened, it’s still a long shot. For one, Oliver noted, we probably wouldn’t be much better considering the line of succession: depending on how everything plays out, we could have a President Mike Pence, President Paul Ryan, or President Orrin Hatch (a Republican senator from Utah). But to even get there, Trump would need to be impeached by a majority House and convicted by two-thirds of the Senate, which both have Republican majorities.