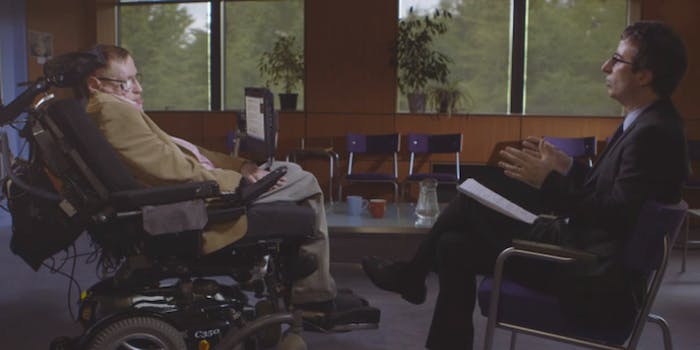 In the near future, artificial intelligence could design itself to be better, stronger, and faster than humanity and destroy us all.

So says Stephen Hawking in a interview with John Oliver, who continues to supply us with excellent Monday morning material from his Sunday night talk show, Last Week Tonight. His interview with the renowned theoretical physicist at Cambridge is part of the show’s “People Who Think Good” series, and from the title alone, you know it’s going to be enlightening.

In addition to questions about artificial intelligence and imaginary time, Oliver asks Hawking how he would deal with a rogue drug dealer (to test his “street smarts”), and whether, in a parallel universe, he could date Charlize Theron. When he asks if Hawking might be a robot, Hawking zings back: “You’re an idiot.”

Oliver’s show has quickly proven itself on par with late-night cable shows, in terms of the viral clips it produces. However, instead of celebrity jokes and gags, Oliver is actually addressing important issues in a relatable way. His explanations of net neutrality and the evils of FIFA were two of the most referenced on the Web. When’s the last time that happened on late night?