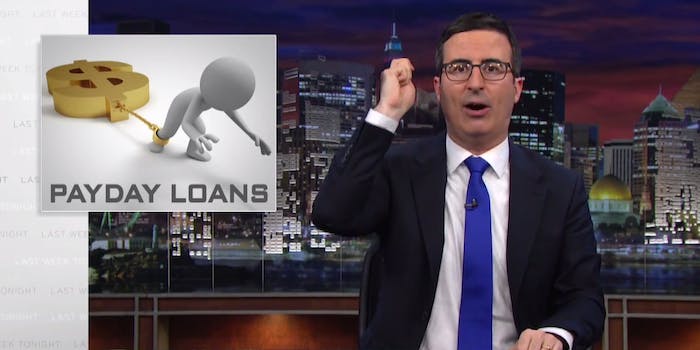 Seriously, don't even think about it.

In an ongoing effort to inform the masses, John Oliver tackled yet another issue taking over tha nation that most of us are likely unaware of: the deep, dark world of predatory lending.

At first glance, this type of lending, commonly known as payday loans, seem like a quick solution to an unexpected problem. You get the money, your initial problem is fixed, and then you pay back the lenders by payday. Thing is, they come with astronomical interest rates—some has high as 1,900 percent—and added fees if you don’t pay off the loan on time. It can turn into an endless circle of even more debt. (Literally, it’s a circle; Oliver had the flowchart to prove it.)

It’s an industry full of awful sob stories, and it’s become enough of a financial epidemic that some states have tried to take legislative action against major payday loan companies. However, the companies have celebrity endorsements (think Montel Williams) to sell payday loans to the public.

To counter it, Oliver has a celebrity endorsement of his own, as he tries to convince you to consider all of your options (and they are endless, if you get creative) before taking out a payday loan.