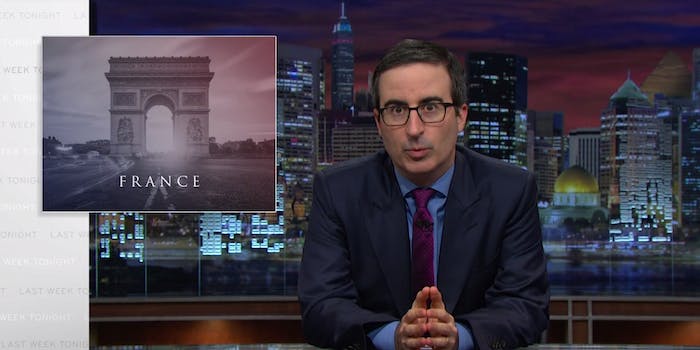 'If you are in a war of culture and lifestyle with France, good f*cking luck.'

John Oliver addressed the Paris terrorist attacks on Sunday’s Last Week Tonight in an empowered and profanity-laced rant that only an HBO host could deliver.

While Stephen Colbert opted for an emotional message on The Late Show and Saturday Night Live ditched its cold open for a bilingual message of solidarity, Oliver gave into his anger before offering his thoughts and condolences to the victims.

We’re still learning what happened during Friday’s attacks, although the Islamic State has claimed responsibility. But Oliver, perhaps not wanting to spread misinformation, kept it vague and to the point.

“Here is where things stand: As of now we know this attack was carried out by gigantic fucking assholes,” Oliver said. “Unconscionable flaming assholes. Possibly, possibly working with other fucking assholes. Definitely working in service of an ideology of pure assholery. Second, and this goes almost without saying: Fuck these assholes. Fuck them, if I may say, sideways. And third, it is important to remember, nothing about what these assholes are trying to do is going to work.”

Using his trademark method of breaking down tough topics for his audience, Oliver then explained just why, no matter how hard these assholes try to fight a “war of culture and lifestyle with France,” it’s never going to work.