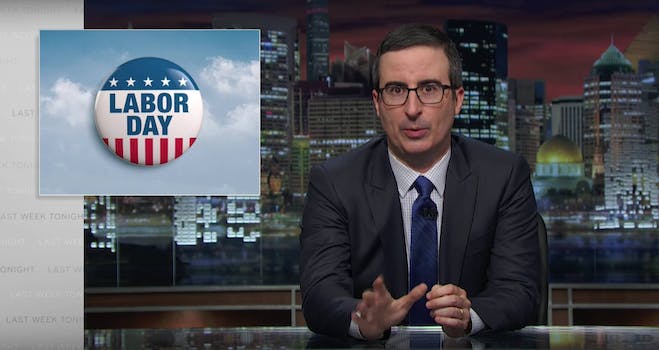 'We should be using more holidays as arbitrary points to stop doing things.'

Since hitting HBO two years ago, Last Week Tonight has tackled a bevy of issues plaguing the nation and the world. No one has been exempt from the masterful takedowns of John Oliver, not even… Labor Day.

The Last Week Tonight YouTube channel posted a brief video about the holiday, which isn’t itself problematic. Rather, the nation’s collective, arbitrary decision to stop wearing white is the real issue here.

“We should be using more holidays as arbitrary points to stop doing things,” Oliver exclaims, before listing all the ways we’re doing it wrong. Pumpkins and decorative gourds past Thanksgiving? GTFO. Even winter holiday delight eggnog gets taken down a notch if you’re drinking it come the start of a new year.

He does have a point, especially if reeling in the calories is one of your new year’s resolutions. Sorry, eggnog. And sorry, the color white. Looks like your time has come.