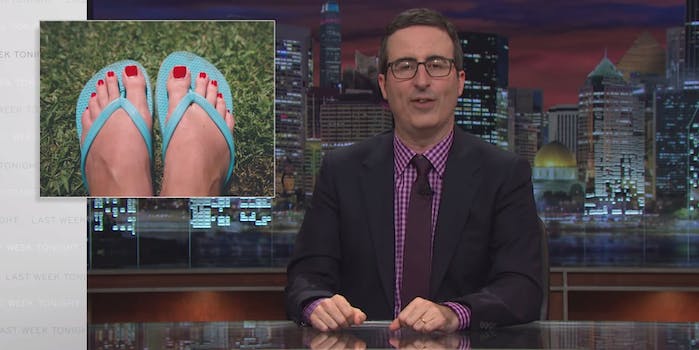 The HBO host celebrated the weekend by covering some uncharacteristically shallow topics.

We’re used to John Oliver picking up the slack from cable news and doing 20-minute deep-dives into controversial topics. But hey, we just had a holiday weekend, and even comedy news anchors are entitled to some vacation time.

Instead of a regular episode of Last Week Tonight, Oliver posted a rapid-fire round of frivolous news stories this Sunday.

Dogs? Good. Bagels? Donuts that gave up on their dreams. Flip-flops? Lingerie for foot fetishists. (That’s certainly one to ponder during the summer months.) Oliver crammed an impressive number of topics into this mini-episode, and unlike most of his serious fare, none of them are remotely meaningful.

It’s exactly the kind of coverage we need to get us into the spirit of the summer.

Even when he’s covering totally pointless non-news “news” stories, Oliver is still somehow better than most TV anchors. One week without a real Last Week Tonight episode is one week too many.