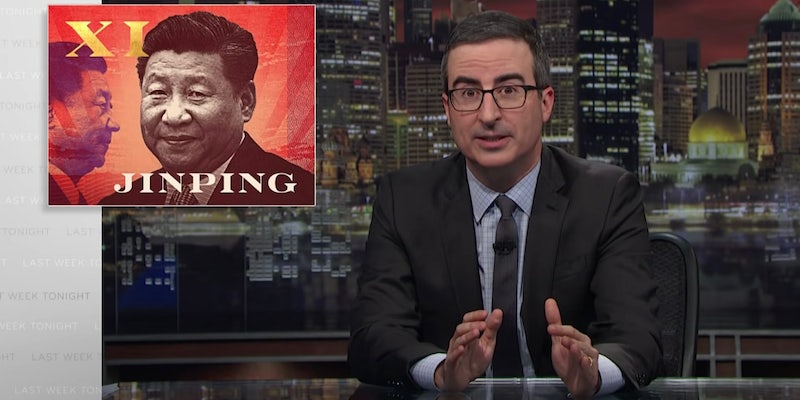 Users on Weibo cannot search for or watch the 'Last Week Tonight' segment.

Mentions of John Oliver and his segment on Chinese President Xi Jinping have been removed from Weibo after the latest episode of Last Week Tonight criticized the world leader.

According to the Guardian, any content referring to the most recent episode of Last Week Tonight has been taken off Weibo, or China’s version of Twitter. Users also can’t search for Oliver’s name or the Chinese title of Last Week Tonight. Publishing posts with Oliver or Last Week Tonight in it is also no longer allowed, with users getting a message stating that it doesn’t comply with “relevant laws, regulations, or violates Weibo community rules.”

Users are still able to view videos from previous episodes of Last Week Tonight with comments still appearing online as recently as June 14.

Oliver’s 20-minute segment covers a variety of topics, but about halfway through his video, Oliver begins to focus on criticism of Xi and the president’s attempts to censor his own people.

“While China has never exactly been known as a haven for free expression, he has clamped down noticeably on any form of dissent whatsoever,” Oliver said.

But on top of giving attention to China’s alleged human rights violations, arresting his political enemies, and trying to stifle criticism over the state of the economy, it highlighted the fact that Xi and the Chinese government have censored Winnie the Pooh after people began to compare Xi to the beloved Disney character based on that resemblance. Oliver, who knows something about being compared to cartoon characters, ran with it and ended the segment with children performing a parody that compared Xi to Winnie the Pooh.

“Clamping down on Winnie the Pooh comparisons doesn’t exactly project strength,” Oliver added. “It suggests a weird insecurity in him, and experts say Xi is deeply concerned that public opinion will turn on him.”