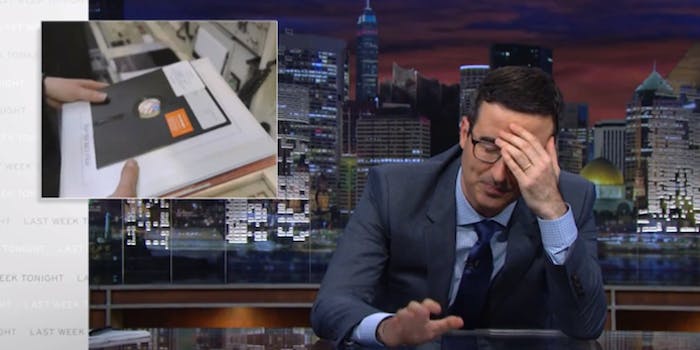 He explains we, as a country, spend more time worrying about whether we hit “reply all” on an office email than our nuclear weapon situation. And, he posits, maybe we should be a little more concerned about the 4,804 nuclear warheads that currently exist in America.

Just how well are we taking care of those warheads, housed in Wyoming, Montana, and North Dakota? The answer: Not well at all. At one facility, the machine that would transmit an order from Pres. Barack Obama for launch runs on floppy discs. Another facility earned the equivalent of a “D” in missile launch proficiency. Elsewhere, officers were found sleeping and leaving doors to facilities open.

Even better is Oliver’s explanation of the chain of command that could possibly launch those missiles, including one General who got drunk at a Mexican restaurant in Russia and tried to play guitar with a Beatles cover band. Another has a gambling problem. Ah, Dr. Strangelove never fails to be relevant, does it?

Oliver hinges every segment on giving a passionate monologue that’s double-edged with outrage, and here, he truly illustrates the shrug emoticon that is our nation’s nuclear weapon chain of command.