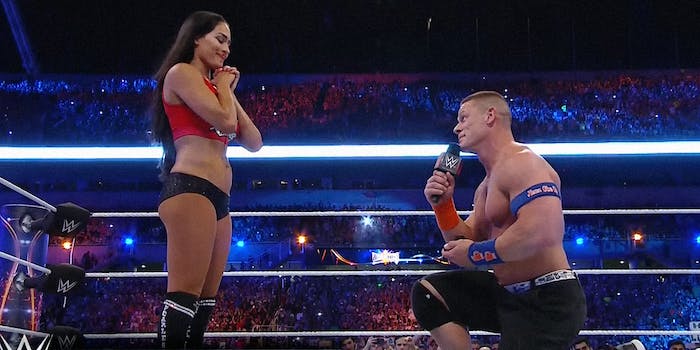 A ring after winning in the ring.

WrestleMania 33 had plenty of smackdowns and the surprise return of the Hardy Boyz, but John Cena won much more than a match after proposing to his longtime girlfriend, right there in the ring.

Prior to their tag-team matchup against married wrestlers The Miz and Maryse, Cena and Bella’s relationship had been a point of contention. The couple had been dating for more than three years and Cena said he wasn’t interested in being married or having kids, although he appeared to be warming up to marriage in recent months. The Miz and Maryse, who are married to each other, called Cena and Bella’s relationship fake, with Maryse adding that Bella was jealous of her because she had what Bella didn’t: a ring.

The matchup seemed all but inevitable.

The two couples met one another in the ring, and while The Miz and Maryse looked like they might’ve taken it all, Cena and Bella came back to win the whole thing.

But that wasn’t all. After winning their WrestleMania match, Cena pulled a move that most of us weren’t expecting—and it was definitely an all-timer.

We just have one question: Where did Cena have the ring during the match?

The camera continued rolling once Cena and Bella left the ring with a ring, and now that they were no longer performing for the crowd, they were able to revel in a much quieter victory—one that will last long past this season.

I want to thank my always expressive "family" the @WWEUniverse for allowing me to have a #WrestleMania moment that I will NEVER forget!