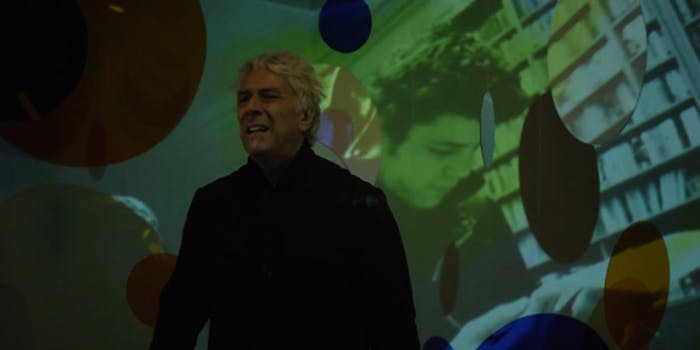 Everyone go listen to some Velvet Underground tonight.

Lou Reed passed away a year ago today, leaving behind a gilded legacy and back catalog, both solo and with the Velvet Underground. Today, former Velvet Underground bandmate John Cale released the perfect tribute to him.

Cale re-recorded the song “If You Were Still Around,” which originally appeared on his 1982 album Music for a New Society. The new version sounds more filled out than the original, which just featured somber organ and Cale’s voice. The video functions as a tribute to others who have passed as well, including Andy Warhol and Edie Sedgwick, whose images are projected around Cale.

Cale passed along a touching statement with the video, highlighting his artistic and personal relationship with Reed:

A Moth and a Candle met. They decided to become friends. Everyone enjoyed watching their discourse—especially the risk takers. Then one day a big rain came. The Moth couldn’t fly and the Candle puttered out. Everyone laughed in bitter awe and blamed the rain. Most however knew the deeper truth—the Candle remains lit and the Moth will stay close.

Everybody go listen to some Velvet Underground tonight.