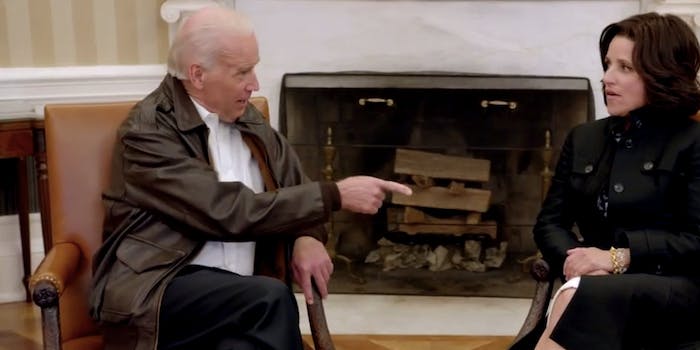 Vice President Joe Biden was not, as host Joel McHale pointed out, in attendance at the White House Correspondents’ Association dinner last night. He had a very good reason, though. He was out on the town with Selina Meyer, his parallel number in the HBO political comedy Veep, a character played with post-Seinfeld pettiness by the one and only Julia Louis-Dreyfus.

In this delightful promo, we get to see how the second-most-powerful people on the planet kill their time: The two of them scarf down ice cream in the White House basement, duck the First Lady’s arm-wrestling challenge, write fake headlines for the Amazon-controlled Washington Post, and ultimately get matching tattoos (after seeing how badass Nancy Pelosi’s looks).

If you ask me, though, we needn’t worry about a Meyer-Biden primary battle in 2016. Every insider knows they’re going to share the ticket—it’s just a matter of who gets top billing.