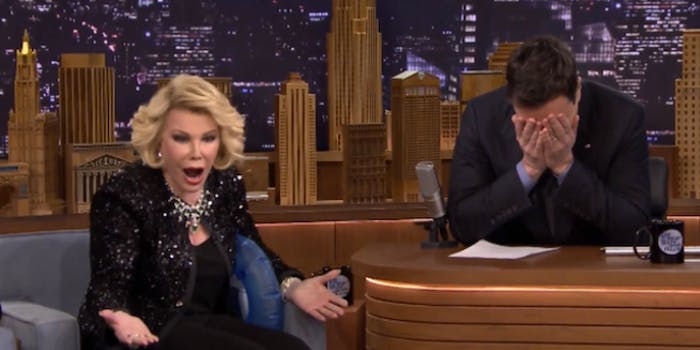 Still as filthy as she wants to be.

Last night, Joan Rivers returned to The Tonight Show 26 years after being banned, and she did not hold back.

Rivers, a frequent guest host on The Tonight Show during Johnny Carson’s tenure, began appearing on the show in the ‘60s, and was featured as a writer and opening monologist. In 1983, she was named his permanent guest host. In 1986, she was offered her own late-night talk show on Fox; Carson allegedly never spoke to her after that, and banned her from any show on NBC.

Rivers made a brief appearance on The Tonight Show last month, during new host Jimmy Fallon’s first show, but last night marked her first legit guest spot in nearly 30 years. She talked about getting older, returning to the show after her falling out with Carson, her new sex tape, and made jokes about her vagina that made Questlove cover his eyes.