Thanks to an adorable YouTube video, Houston Texans defensive lineman J.J. Watt became the object of every little football fan's affection this week.

Houston Texans defensive lineman J.J. Watt became the object of every little football fan’s affection this week when he responded to a YouTube video of a 6-year-old named Breanna expressing sadness over the fact that her young age would prohibit the two from ever getting married.

The video, which was posted Jan. 12, has been seen more than 90,000 times and attracted more than 80,000 “awwww”s. It’s cute. It’s charming. It makes you feel good about the future of football fandom.

Watt learned about the clip shortly after returning from his weeklong trip to the NFL’s Pro Bowl in Hawaii. When he got back, he tweeted a message to his 200,000 followers asking if anyone “happen[ed] to know this cute little girl.”

“We have to find her and turn those tears into a smile,” he wrote. 48 hours later, he made his connection.

Watt came to the meeting holding a bouquet of flowers and a white jersey bearing his name and number. When the two met, Watt went down onto one knee and pulled out a Ring Pop and “proposed” to 6-year-old Breanna.

The happy couple hugged, posed for pictures, and then hugged again. After that, J.J. Watt stood up and probably went to eat a 6,000-calorie meal. Breanna, on the other hand? We’re guessing she went home and texted all her friends about the new boyfriend she’d just planned to marry. 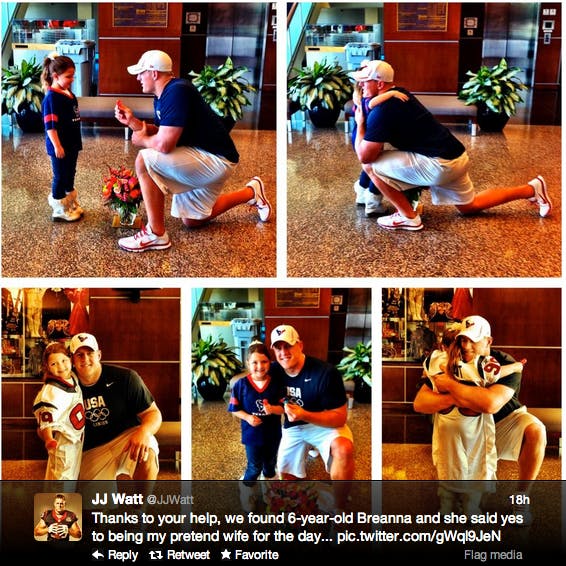