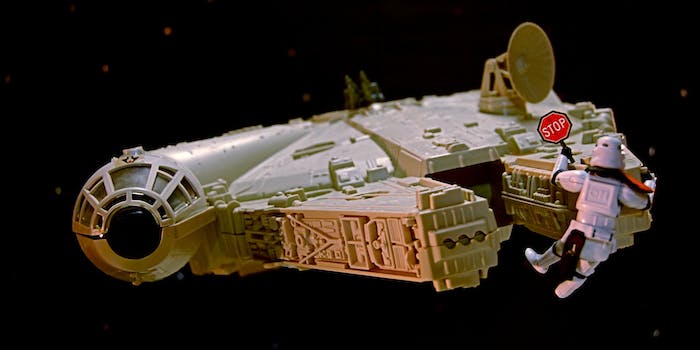 The Star Wars director took to Twitter to ask that the leaked photos stop.

J.J. Abrams has a message for the people who have been leaking photos from the set of the new Star Wars movie: Please stop.

Filming for Episode VII has only been going on for close to three weeks, and unofficial photos from the set have leaked online almost from the start, mainly from TMZ.

Aside from a glimpse at a new creature and a slate, Lucasfilm has been silent on the state of filming—although it did announce the casting of Lupita Nyong’o and Gwendoline Christie on Monday.

Once rumors spread that the Millennium Falcon would appear in Episode VII, Abrams finally took to Twitter to shoot down any rumors and to nicely ask for the leaked photos to stop.

The location of Abrams’s handwritten message (which isn’t his first) is a curious thing for Star Wars fans. To some, it might just look like a ship part, but some will notice that the note is on what looks like a Dejarik board.

It’s a popular game in the Star Wars universe with a circular chessboard on a hologame table and 3D “holomonsters” as the pieces. If you’ve seen A New Hope, you’ve already seen a Dejarik board—aboard the Millennium Falcon.

We won’t know for sure until we see a trailer—or yet another leaked picture.