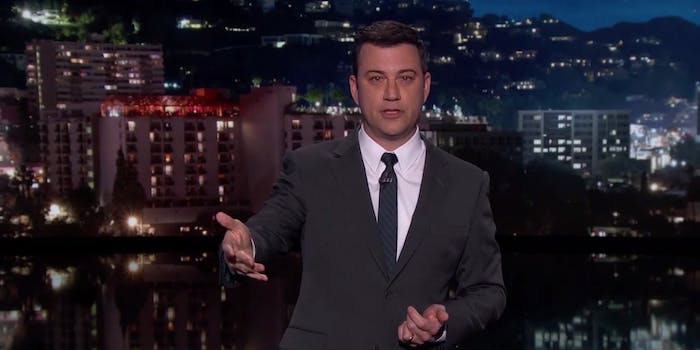 They each took time out of their show to speak highly of their mentor and late-night rival.

While Bill Murray popped out of a cake for David Letterman Tuesday night, Jimmy Kimmel and Seth Meyers took a different approach to honoring the influential late-night host.

A choked-up Kimmel spoke highly of Letterman after his monologue. He’s been a fan of Letterman’s since he was a teenager, when he got a Late Night cake for his birthday, wore Letterman’s jacket, and hosted viewing parties with his friends. He loved Letterman because he didn’t look like he belonged—and he learned everything he knows about hosting a show from him.

“The only reason I have this show is because the executives at ABC saw me on Dave’s show and hired me for this show,” Kimmel said as he held back tears. “So I want thank Dave, his writers and producers. Tomorrow night is Letterman’s farewell show, and I’d like it if you made sure to watch that instead of our show. We’re still going to have a show—it’s going to be a rerun—but please do not watch it, especially if you’re a young person who doesn’t understand what all the fuss it about. Dave is the best, and you should see him.”

He then aired a clip from one of Letterman’s old shows, which might have been a better pick-me-up straight from the horse’s mouth than anything Kimmel or another late-night host could have said.

Meyers, who helms the show where Letterman started, recalled watching Letterman’s “Top Ten” lists and reciting them with a friend in high school, but more importantly, he remembered the host’s warmth and how he could make everything seem fascinating, no matter how mundane.

“He could talk about something very insignificant and make it much more interesting than anyone else could,” Meyers said. “He was a host who brought that out of people.”