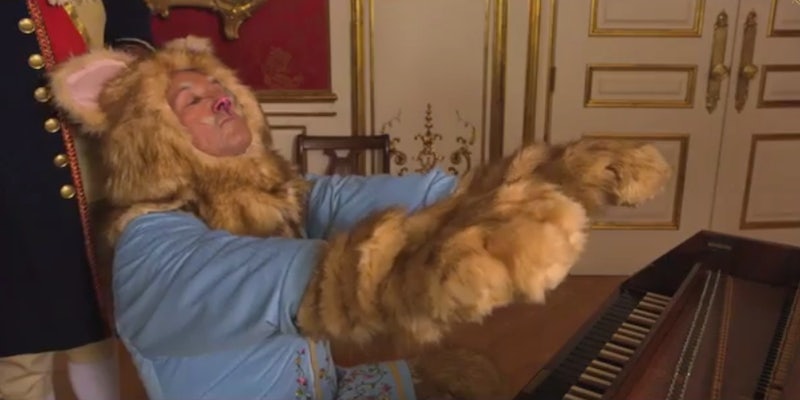 When it comes to the Oscars, Jimmy Kimmel isn’t pulling any punches.

He already released another edition of “Mean Tweets” during ABC’s Oscar preshow, and his annual post-Oscars special was full of celebrity cameos and stars completely game for even the silliest of elaborate movie spoofs.

Last night’s show, Kimmel’s ninth, was no different. Instead of making an additional film to “Movie: The Movie” and “Movie: The Movie: 2V,” the man who’s gone viral from the many segments on his show (as well as the ones he set up to look like viral videos) released not one, but four movie trailers packed to the brim with cameos.

Each of them is a dramatic take on a viral video that’s captivated us from the moment it starts. We’ve seen the original videos, but that’s only the beginning.

First up? When Charlie Davies-Carr bit his brother Harry’s finger, it didn’t just create a laughable moment. They’re both a lot older now, and Harry’s out for vengeance in “Bitman Begins,” the “Christopher Nolan–directed film” that stars Liam and Chris Hemsworth.

“Sweet Brown: Ain’t Nobody Got Time for That” is like the modern Forrest Gump. While looking for a Cold Pop, she runs into a young Barack Obama and Steve Jobs and gives them the advice they need to make their mark on history.

And you must not have been paying attention because Sweet Brown has popped up a lot more often than we know over the years.

The musical rivalry gets even more intense when it’s not Mozart and Salieri, but rather Keyboard Cat and Hamster on a Piano in the dramatic “Ameowdeus.” Dramatic Chipmunk even makes an appearance in this story of jealousy and animal music.

If nothing else, it’s Kevin Spacey and Christoph Waltz in a cat and hamster costume, and they might just be next year’s frontrunners.

“David After Dentist” already shows David on anesthesia, so when it came to adapting it to film, naturally it turned into a trippy ride of David’s hallucinations including the Tooth Fairy, Double Rainbow, and an evil dentist played by Samuel L. Jackson.