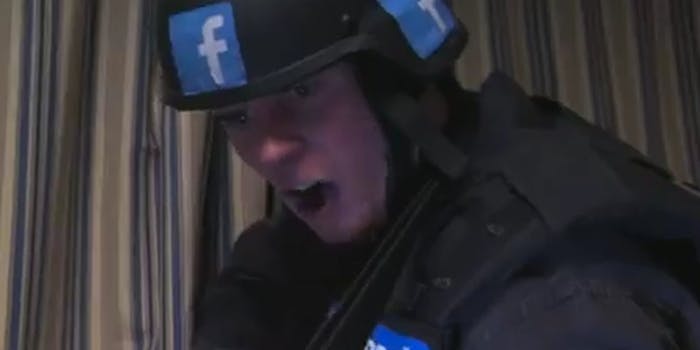 Hey, didn't we see this sketch on YouTube yesterday?

You’d better use your newly instituted Facebook email, or there will be a price to pay from the Facebook Police.

A gang of tough and terrifying Facebook Police might not exist in the real world, but in Jimmy Kimmel’s imagination, they do. On Tuesday night’s episode of his eponymously titled talk show, he showed what a visit from the Facebook Police could be like if you don’t follow the rules.

In the minute and a half clip, an unsuspecting bro is tapping mindlessly on his computer when the Facebook Police barge in and ask him why he isn’t using his Facebook email.

“I didn’t know I had one. I just use Hotmail for that stuff,” the user responds, pretty much echoing everyone in the world.

The police then force him to make his Facebook email default, but his poor mother falls victim to their brutality. The user also gets an extra lashing for not switching over to Timeline (which is deserved, since it is a lot nicer than the old profile page).

The Facebook Police have a track record of visiting if you attempt to customize your account, as seen in this video.

Perhaps it’s best not to use Facebook at all, since the Google+ Police are probably a lot gentler.