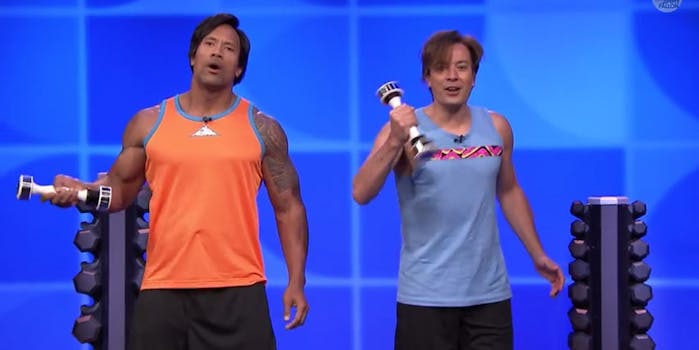 Jimmy Fallon and the Rock want to pump you up

Is there anything these two can't do?

Is there anything Jimmy Fallon and Dwayne “the Rock” Johnson can’t do?

On The Tonight Show last night, the unlikely duo starred in a series of exercise videos as the “Fungo Brothers.” Modeled after infomercials, the skit traced the fitness gurus’ history from humble beginnings in the 1950s to the present, with the infamous “Shake Weight.”

You can all die happy now that you have seen the Rock, who was promoting his new film Hercules, perform the “Twist” while wearing a bad wig. It was still a better career move than The Tooth Fairy.

Even if The Rock wanted to hang up acting and wrestling for good, he wouldn’t be the first pro wrestler or actor to dive into the exercise video market. Check out this all-too-real workout video from Hulk Hogan.

And if that isn’t enough, sit back and cringe your way through an exercise video hosted by none other than Golden Girls star Estelle Getty.

Exercise videos: Shed your pounds and your dignity.