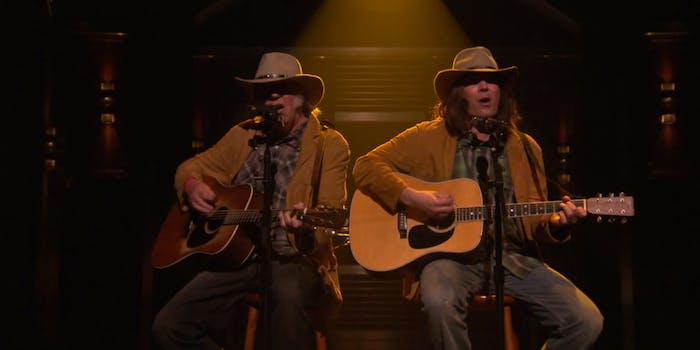 Jimmy Fallon's honing in on Young.

Neil Young finally got to play a duet with the one person he never previously could: himself.

Jimmy Fallon already made a quasi Crosby, Stills, Nash, and Young reunion happen while he performing as Young, so the next step was to make a Neil Young clone. Since we don’t have the science for that quite yet, Fallon brought on the very person he portrayed onstage to play with him.

The performance itself—which would’ve normally featured Young playing something more modern—goes classic instead. It’s a tune Young actually played himself, so it’s that much sweeter when he actually comes out with a guitar of his own.

His oft-repeated lyrics of “Old man look at my life, I’m a lot like you,” will probably never be this true again.