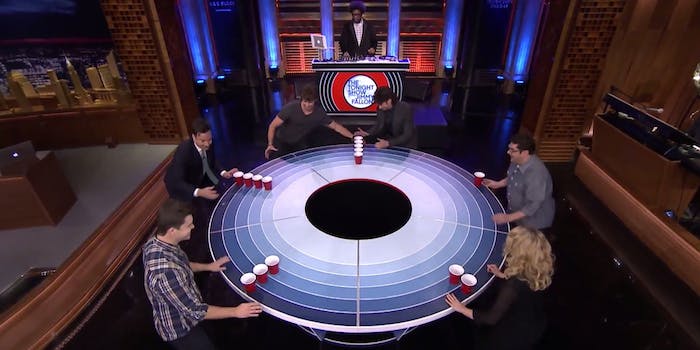 There’s got to be an easier way than this to get a cup of beer at the show.

We’ve never seen Thor and Wolverine go at it like this.

Hugh Jackman was ready to play Jimmy Fallon’s latest game, but you can’t simply play musical beers with just two people. Luckily for them, the cast of Saturday Night Live was nearby in Rockefeller Center, so Kate McKinnon, Colin Jost, and Bobby Moynihan, plus upcoming host Chris Hemsworth, joined in the fun.

After the customary passing of mullets—which went to the people who would simultaneously look the best and the silliest in them—the celebrities were ready to go. It naturally didn’t go exactly as planned, because who was really going to adhere to the rule of grabbing the one beer in front of you?

To be fair, this is probably one of the few ways to get adults to play this game among themselves.