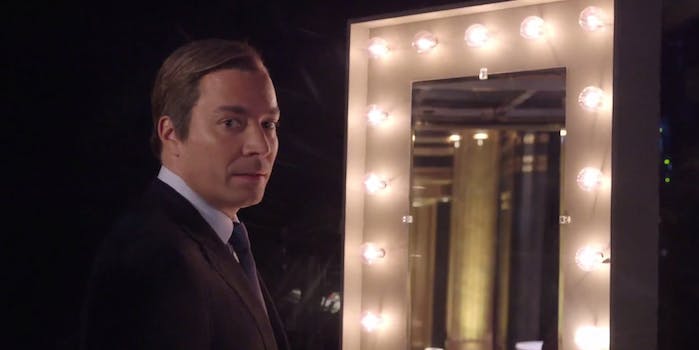 Jimmy Fallon is Frank Underwood in this ‘House of Cards’ parody

It's not easy being the man in charge.

You can’t just win the seat for host of The Tonight Show. You have to maintain it.

Back in his Late Night days, Jimmy Fallon would often put on full-on parodies of shows like Breaking Bad, Game of Thrones, and Downton Abbey. Fallon is bringing the tradition back, foregoing the usual games by tackling the seedy politics and underbelly of late-night in a House of Cards parody complete with dramatic shots of 30 Rock.

Perfectly tackling the southern drawl of Kevin Spacey‘s Frank Underwood, Fallon navigates through the various tasks of running a late-night TV show. But none of the gimmicks, from from speaking directly into the camera to his rib habit and low-talking colleague, work out as well for him.

With Ellen Barkin stepping in as Claire and a mysterious someone not happy about the new Tonight Show—a scene that echoes a key moment from season two of House of Cards—all might not be well for the new man in charge.