Since breaking into the stand-up comedy circuit in the early 1980s, Carrey has proven time and time again that he is one of the most energetic personalities in Hollywood. Here are 51 GIFs from his long career.

Believe it or not, Jim Carrey turns 51 today. 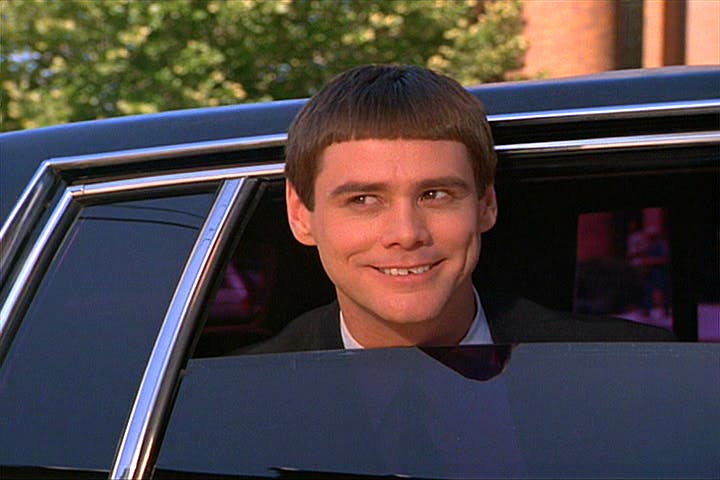 Since breaking into the stand-up comedy circuit in the early 1980s, Carrey has proven time and time again that he is one of the most energetic personalities in Hollywood. He has used his naturally double-jointed limbs and rubber-esque face to breathe life into his own original characters and to impersonate contemporaries from Clint Eastwood to Cher.

His career began a serious rise when he was cast in the Fox Network’s comedy sketch program In Living Color. In 1994, he achieved superstardom with his starring role in Ace Ventura: Pet Detective.

To mark his birthday, we at the Daily Dot collected 51 GIFs from his work throughout the years.

1) Carrey impersonating Jack Nicholson’s version of the Joker in a stand-up comedy performance.

2) Carrey impersonating Elvis Presley during his first appearance on The Tonight Show in 1983.

6) Carrey as Skip Tarkenton in The Duck Factory, a 1984 NBC sitcom that lasted only 13 episodes.

7) Carrey as Mark Kendall, a teenager bitten by a vampire in the 1985 movie Once Bitten.

8) Carrey as Walter Getz in the 1986 comedy/drama film Peggy Sue Got Married (which co-starred our good friend Nicolas Cage).

15. Carrey in an uncredited role as Death in the 1991 movie High Strung.

16) Carrey in an early dramatic role as Tim Carver in the made-for-TV movie Doing Time on Maple Drive.

17) Carrey lends his voice to the Exterminator in the 1992 cartoon Itsy Bitsy Spider, which was later released on the Bebe’s Kids DVD.

20) Carrey as the zany, cartoonish title character in The Mask, released in 1994.

21) Carrey as the dimwitted Lloyd Christmas in 1994’s Dumb and Dumber.

23) Carrey reprises the role of Ace Ventura in 1996 in Ace Ventura: When Nature Calls.

25) Carrey as Fletcher Reede in the 1997 fantasy comedy Liar Liar, in which he literally cannot tell a lie for 24 hours.

26) Carrey shows off his dramatic skills on the big screen in 1998 as Truman Burbank in The Truman Show.

27) Carrey at the 68th Academy Awards, presenting the Oscar for Best Visual Effects.

28) Disguised as a hippie, Carrey accepts the Best Male Performer trophy at the 1999 MTV Movie Awards.

30) Carrey as the third Roxbury Guy during his May 1996 Saturday Night Live hosting stint, the first sketch for the Will Ferrell and Chris Kattan characters.

31) Carrey as the late comedian/prankster Andy Kaufman in 1999’s Man on the Moon.

32) Carrey under pounds of green furry makeup in the 2000 live-action version of Dr. Seuss’ How The Grinch Stole Christmas!

33) Carrey as Charlie Baileygates (and vile alter ego Hank Evans) in 2000’s Me, Myself, and Irene.

34) Carrey as Peter Appleton, a blacklisted screenwriter mistaken for a small town’s long-lost son, in The Majestic, released in 2001.

35) Carrey as Bruce Nolan, a Buffalo TV reporter who inherits God’s powers for one week, in 2003’s Bruce Almighty.

36) Carrey as Joel Barish in the 2004 independent science fiction drama Eternal Sunshine of the Spotless Mind.

37) Carrey as the dastardly Count Olaf in the 2004 adaptation of Lemony Snicket’s A Series of Unfortunate Events.

38) Carrey as deposed yuppie Dick Harper in 2005’s Fun With Dick and Jane.

39) Carrey as Walter Sparrow, obsessed with the titular numeral in the 2007 thriller The Number 23.

41) Carrey as the enthusiastic-to-a-fault Carl Allen in the 2008 comedy Yes Man.

42) Carrey as con artist Steven Jay Russell in the 2009 comedy/drama I Love You, Phillip Morris.

43) Carrey’s famous face was worked into the multiple 3D characters he voiced in Robert Zemeckis’ 2009 version of A Christmas Carol.

45) Carrey again teams up with an array of animals as Tom Popper in 2011’s Mr. Popper’s Penguins.

48) Carrey professes his love for actress Emma Stone in a 2011 video.

49) Carrey promotes the Better U Foundation in a video for the organization that helped him overcome depression and get in touch with his spiritual side.

50) Carrey as President Ronald Reagan in the Funny or Die video “Presidential Reunion.”