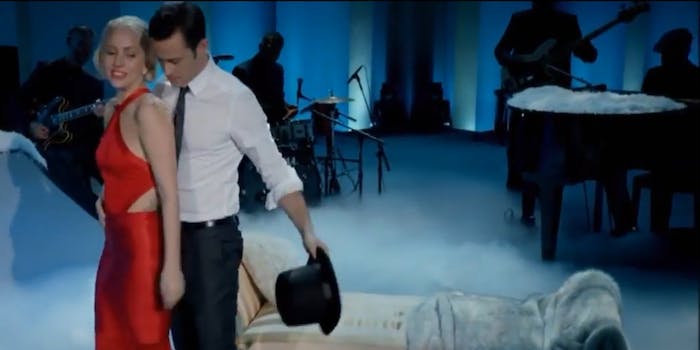 A famed holiday duet gets a sultry new twist.

We have at least 8 reasons to love last night’s Lady Gaga & the Muppets’ Holiday Special, and none of them have to do with Muppets.

No, the highlight of what was a pretty blatant cross-marketing gimmick for Gaga’s current album ARTPOP and the Muppets’ upcoming film Muppets Most Wanted had nothing to do with Jim Henson and everything to do with Joseph Gordon-Levitt, who took the stage in a surprise duet with Gaga to sing the holiday classic “Baby, It’s Cold Outside.”

The first thing JGL and Gaga did right? Change the roles of the singers. The Oscar-winning Frank Loesser number, originally written for Loesser’s wife, walks a fine line between a tastefully charming seduction and a potentially skeevy situation where a girl is trying to get away from a guy who won’t stop pressuring her. To fix this, Gaga took the lead, and Gordon-Levitt played a guy who’s clearly already decided to stay.

The second thing has to be the miracle of JGL’s wardrobe, which unironically includes a top hat, cane, and mismatched patterned holiday socks. Only an entertainer as awkwardly sincere as JGL could pull off a combination like this without becoming camp—but it helps that Gaga is casually undressing him all the while. That brings us to the third best thing about this duet. To quote another Loesser lyric: Chemistry? Yeah, chemistry.

Fans already knew JGL could sing—we’ve seen him perform an epic swing duet with Zooey Deschanel, along with countless other musical performances as part of his creative social platform HitRECord.

But there are still plenty of surprises in last night’s performance to make this Oscar-winning classic feel fresh and sultry all over again—enough to warm us up on a cold winter night.