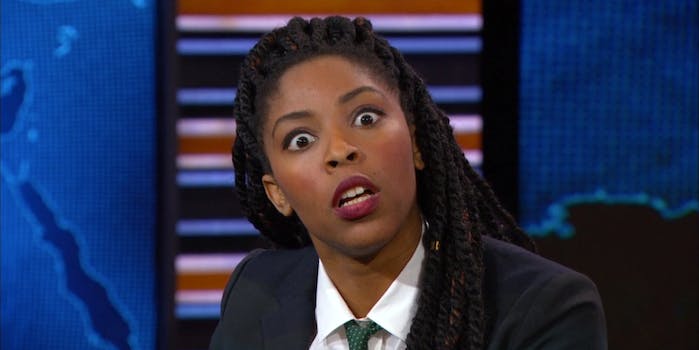 She'll be starring in her own scripted Comedy Central show.

Earlier this week, Daily Show correspondent Jessica Williams announced she was leaving the show in order to make her own TV show at Comedy Central. Williams, one of last correspondents from the Jon Stewart era, got a sentimental send-off with just the right amount of exasperation.

Thursday’s show started with her final segment, a group sit-down with some Bernie Sanders supporters voting for Donald Trump whose logic is that, even though he’s the exact opposite of Sanders, at least he’s not Hillary Clinton. She’s unable to break any of them into changing their minds no matter how much she tries, but it’s quintessential Williams.

By the time Trevor Noah got to giving her the Daily Show highlight reel that’s become customary with correspondent exits, Williams was already in tears. With help from the other correspondents, they sent her off with the show’s trademark humor and love.

At least she’s not going too far. Williams will still be on the same channel in her own, still-untitled, scripted comedy about “a politically-minded young woman who may be ‘woke’ but doesn’t know what she’s doing.”