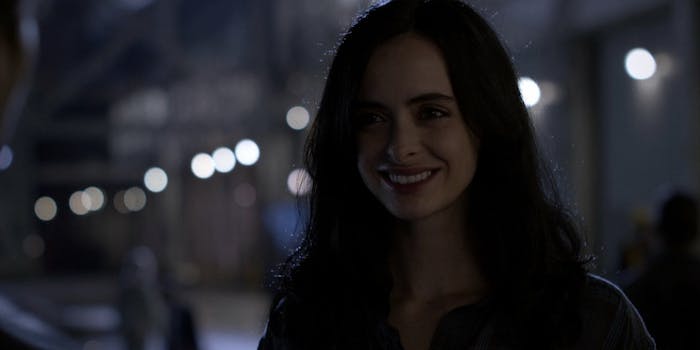 The mind control in ‘Jessica Jones’ you didn’t notice

And it isn't Kilgrave this time around.

This article contains spoilers for the season finale of Jessica Jones.

Trauma, sexual violence, and sexism are some of the major themes woven into Netflix’s Jessica Jones, and the Internet is abuzz with how well the show has managed topics that many others have either mishandled or totally shied away from.

But while much of the 13-episode first season is focused on either evading or breaking free from the sinister Kilgrave’s mind control, the show perpetuates a similar sort of power in something separate from its plot development. Product placement in one of the pivotal scenes of Jessica Jones acts as a different kind of mental manipulation, this time for the audience members.

Here’s the low-down if you haven’t already binge-watched the latest Marvel property by now: The series stars Krysten Ritter as the titular superhero-turned-private investigator with super strength, just looking for a way to pay her Hell’s Kitchen rent and buy a bottle of cheap whiskey. When Jessica picks up what she believes to be a simple case of a missing girl, she soon finds out that the man that held her captive and raped her for over a year through his power of mind control has returned. His name is Kilgrave (David Tennant), and he is the physical embodiment of the patriarchy, obsessed with regaining control over Jessica. Kilgrave has to simply tell someone to do something and they feel completely compelled to carry out his request. By the end of the first season, Jessica puts an end to his misogynistic, evil ways.

It’s of course a major moment when Jessica finally defeats Kilgrave in the season’s closer. But in order to take down the man that has caused her and so many others pain, Jessica needs a little bit of help from her best friend Trish Walker (Rachael Taylor). In the final battle against Kilgrave, Trish acts as a decoy, impersonating Jessica by wearing her dark clothing and keeping the hood of her jacket up while Jessica sneaks up on the villain. And to keep from being controlled by Kilgrave’s powers, Trish is wearing headphones blasting music to drown out any commands that he might bark at her. These bulky headphones might not be super-powered, but they aren’t just any old headphones, either: You can clearly see the instantly recognizable “b” of Beats by Dre. Now, this might just be a coincidence. As Trish’s mom notes in an earlier episode, her daughter always had good but expensive taste. And Beats headphones definitely are on the pricy side, ranging anywhere from $200 to $1,200. But with the amount of detail that went into the aesthetic of the show, from Jessica’s modest wardrobe to Trish’s expansive closet, we have to doubt that it was entirely up to chance that Trish was sporting Beats headphones.

Eventually, the uber-branded piece of technology falls off of Trish’s head while she’s keeping some civilians from killing one another—but not before we once again see that “b.” And when they finally do fall to the ground, you get a great look at just how plush they are. The headphones are a tool used by Trish to fend off Kilgrave’s mind control while simultaneously being both a piece of marketing and symbol for control over people watching Jessica Jones.

As Devin Liddell writes in Fast Company, “Beats isn’t great design—it’s just great marketing.” The line’s product placement in music videos has become blatantly obvious, to a point where it’s almost comical. But that doesn’t change the allure that has been created by seeing Miley Cyrus or Snoop Dogg bumping some Beats products. This ingenious marketing is what helped make the company worth $3 billion in the eyes of Apple in 2014. The ethos is that if you’re someone who owns something from Beats, then you’re someone who’s really loves and respects music.

Product placement isn’t a new method of marketing, and it’s definitely an intelligent ploy by advertisers. Instead of telling someone that they need something, it shows why they need it. That they’re someone cool like a dancer on Ariana Grande’s intergalactic spaceship or Jessica Jones’ best friend charging into battle alongside the hero. The subliminal aspect to this marketing is what aligns with Kilgrave’s own insidious abilities. He doesn’t just make his pawns do something against their will; he makes them want to do whatever he instructs. Beats by Dre headphones aren’t in music videos and Jessica Jones just to make you buy; they’re there to make you want to buy them, of your own accord.

And Trish’s headphones isn’t the only form of consumerism mind control in the series: Jessica has a particular affinity for whiskey, with bottles littering her apartment. It’s not all cheap, though; she’s guzzling on some Wild Turkey 101 one night, which isn’t the thriftiest. Then again, the Wild Turkey 101 could have just been a “treat yo’self” situation, because she’s also seen drinking Jim Beam in the pilot, and redditors pointed out this pristine Heaven Hill product placement. At least she switches it up every so often. A similar case of a story’s message running counter to making money can be seen with the Hunger Games franchise. News recently broke that there’d be a theme park inspired by the books. But much of the series’ central theme is about the rich and powerful’s exploitation of children for spectacle. Isn’t that pretty much what an amusement park is? And Jennifer Lawrence’s song “The Hanging Tree” from Mockingjay: Part 1, which was used by the anti-Capitol rebellion in the movie was remixed and polished to play on radios everywhere, becoming a hit single. As one Tumblr user notes, that’s what the Capitol would do to neutralize the power of the song and render it meaningless.

Product placement is clearly a necessary evil for companies looking to make a buck by casually inserting some headphones or some booze. It might not be as malevolent as a British man in a well-tailored suit directing you to donate to him your kidneys or to kill another person, but it can be just as sneaky. And while Jessica Jones eventually rids the world of Kilgrave, the average person is still susceptible to subliminal marketing and sly product placement. There might only be one Kilgrave, but there are masses of companies trying to control your spending habits.