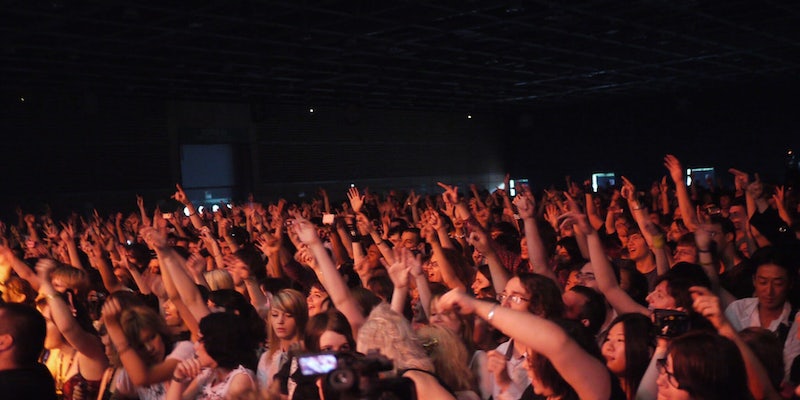 And the stories are still being told.

Once upon a time, a former editor told me he didn’t think I wanted to be a music writer forever because, ultimately, it’s a “boy’s profession.” This didn’t happen decades ago; it happened in the last five years.

I felt the phantom sting of that comment while reading through Jessica Hopper’s Twitter timeline. Since Monday, Hopper—a longtime music critic, senior editor at Pitchfork, and author of the new book The First Collection of Criticism by a Living Female Rock Critic—has been retweeting comments from women and men about experiences with sexism in the music industry. As of yesterday, she said she’d gotten more than 400 responses.

As much as the music industry has shifted both in both medium and message, the idea that women don’t count persists. There’s still the notion that women can’t be true collectors, that they don’t know how to actually play, that they’re backstage to sleep with musicians, not interview them. Last week, Billboard ran a now-deleted poll about Kesha’s sexual assault lawsuit against former producer Dr. Luke. Who did industry execs believe, the poll asked: her or him? Earlier this month, Chvrches singer Lauren Mayberry documented the harassment she’s endured at the hands of trash heaps like 4chan. And, of course, trolls have been popping up in Hopper’s mentions.

@jesshopp being told by an editor, who published women, that in his experience "women just can't be that funny". he still works there.

@jesshopp Constantly being ignored at venues/media calls on arrival as it was assumed I'm someone's girlfriend, not the PR or Tour Manager.

@jesshopp In all-male record label mtg for my 1st record, they said (to me) that the main marketing idea was to make me appear 'fuckable.'

@jesshopp Being told by my male boss at MTV that he would never hire another woman b/c we're distracting. Things turn uglier once I go to HR

.@jesshopp also having to use bathrooms like this while at work pic.twitter.com/2r7tFMEsdl

@jesshopp Being asked to leave backstage (with my toddler in tow) because girlfriends weren't allowed. I was in the band.

@jesshopp finding out the first publication I shot for was paying my male co-workers after being told they didn't have budget to pay me.

@jesshopp the members of the band Yes once thought I was an assistant + asked if I could fetch them Starbucks. I was there to interview them

@jesshopp ok let's do this. so this asshole flew me out to LA to profile some rappers. we all shared an airbnb. it was very 'open.'

@jesshopp all the Hennessey, champagne, & Cali weed I wanted was flowing. i was trying to hang, had no food, & blacked out.

@jesshopp I went to sleep & wake up to the guy, who's told me I'm the "best journalist", ripping off my clothes. i try to push him off.

@jesshopp I physically can't. when i wake up, I throw up for about 45 minutes. my rapist & "patron" walks in whistling. literally.

@jesshopp he says "do you remember last night? You threw yourself all over me." I know it's a lie but there's nothing for me to say.

@jesshopp he knows I'm in a relationship & says "it'd be a shame if [x] were to find out." he proceeds to harass me for days.

@jesshopp to the point where I escaped to the airport when no one was looking & bought an $800 flight home. & cried. & cried.

As Hopper points out, there are still so many women who don’t feel they can speak out about their experiences. For many women, doing so might cost them a paying gig or a job, or worse.

The sheer range, diversity & number of respondents to @jesshopp shows that these are not "isolated cases" but examples of a system at work.

Earlier this year, Hopper spoke with Björk about experiencing sexism in the industry after more than 30 years as an artist, and how women are often rendered invisible within their own work, even as we still must be the “glue” for other parts of our life:

That’s what women do a lot—they’re the glue between a lot of things. Not only artists, but whatever job they do: in the office, or homemakers. …It’s a strange moment. Women are the glue. It’s invisible, what women do. It’s not rewarded as much.

And later, the constant fight:

[I]t’s an ongoing battle. I hope it doesn’t come across as too defensive, but it is the truth. I definitely can feel the third or fourth feminist wave in the air, so maybe this is a good time to open that Pandora’s box a little bit and air it out.

We’ve reached out to Hopper for comment on this “Pandora’s box” and will update this story if we hear back.