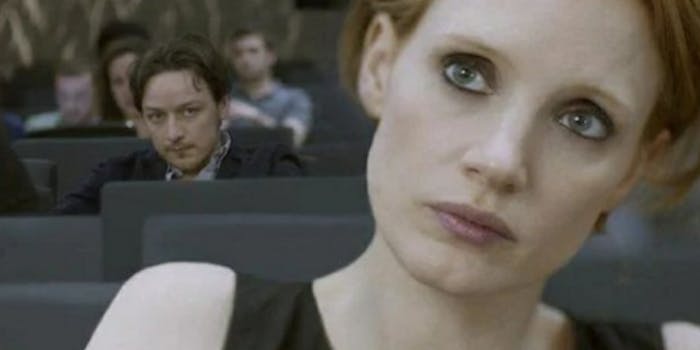 Let these crazy kids work together!

Jessica Chastain is already confirmed to be starring in the sequel to 2017’s blockbuster smash It, but James McAvoy is apparently still in talks for the villain role (alongside Bill Hader, which would be a truly spooky duo tbh). While Hader hasn’t weighed in on the project publicly, McAvoy and Chastain seem like they’re already excited at the prospect of working together.

For exhibit A, we have a tweet from Chastain that she sent out Thursday evening. The red-headed star couldn’t help but notice that certain stills of the teens from the first It film bear a striking resemblance to The Disappearance of Eleanor Rigby, which she and McAvoy were in back in 2014.

“Stalker,” she joked in the caption.

McAvoy fueled the fire with an Instagram joke of his own early Friday.

“I’d like to confirm once and for all that I am in negotiations to be @jessicachastain’s new hair stylist,” he wrote.

I’d like to confirm once and for all that I am in negotiations to be @jessicachastain ‘s new hair stylist. I stepped in for her go to team a few years back and can’t wait to tame that mop of fire for all the mall openings and kids party paid appearances she’s got coming up. Needed a career change and this feels right. I just hope I can cut it. #wetperm #it #jessicachastainsnewhairguy #careerchange

While there’s still no confirmation that the trio will be working together, the studio would be crazy not to let these kids hang out and create viral content for them on set.