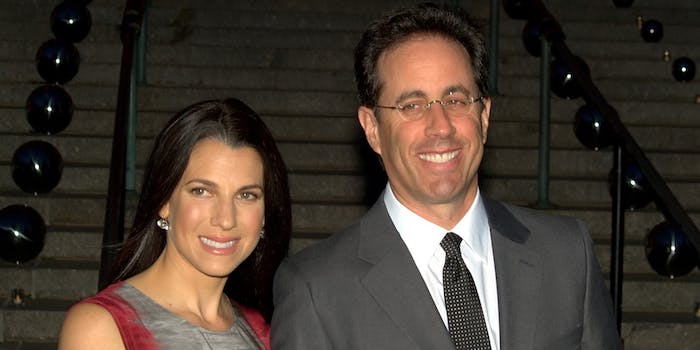 Get off his lawn!

Comedian Jerry Seinfeld has taken a stand against young people and their oppressive politically correct culture.

In an interview with ESPN sports radio host Colin Cowherd last week, Seinfeld addressed Cowherd’s concerns about the political “climate” for comedy, after he remarked that Chris Rock and Larry the Cable Guy don’t even want to play college campuses anymore. Seinfeld said that he, too, didn’t play colleges anymore and that he has been warned not to “go near” them because “they’re so PC.”

The 61-year-old comedian used his 14-year-old daughter as an example of youth gone PC. His wife, Jessica, allegedly told her that in the next few years, she’ll want to hang around the city more so she can “meet boys.” Her response? “That’s sexist.”

“They just want to use these words,” he continued. “‘That’s racist, that’s sexist. That’s prejudiced.'”

Cowherd then cited Artie Lange, of all people, and his struggle to make a joke about Caitlyn Jenner in a culture where we have to take a stance on an issue in seconds.

Yes, the Internet has made us—all of us, not just young people—more aware of and sensitive to issues involving sexism and racism. But has Seinfeld’s comedy ever been that edgy? Louis C.K.’s recent SNL monologue was dissected by the Internet because joking about child molesters will do that to your routine.

We can evaluate what’s funny and what’s not at a breakneck pace, and that instant analysis feeds the echo chamber. For comedy to evolve, there must be a reevaluation of what’s funny and what’s not. But there’s a difference between exploring the pathology of racism and sexism and making a racist or sexist joke because you’re a dick and want to rouse your Twitter followers.

As Seinfeld points out in the interview, “Louis’ great gift is that he doesn’t worry” about offending people. “If I wanted to say something, I would say it. You know, everybody has their hot zone. You know, you’ve got your heat map, and that’s the jokes you do.”

When asked last year about the lack of diversity on his webseries Comedians in Cars Getting Coffee, Seinfeld said focusing on gender or race is turning comedy into a “census.”

“Funny is the world that I live in,” he said. “You’re funny, I’m interested. You’re not funny, I’m not interested. I have no interest in gender or race or anything like that.”

At this point in his career, Seinfeld probably doesn’t even have to play colleges. The bigger question here is, Do college kids even know who Seinfeld is? And if so, do they care? This is the generational divide writ large.