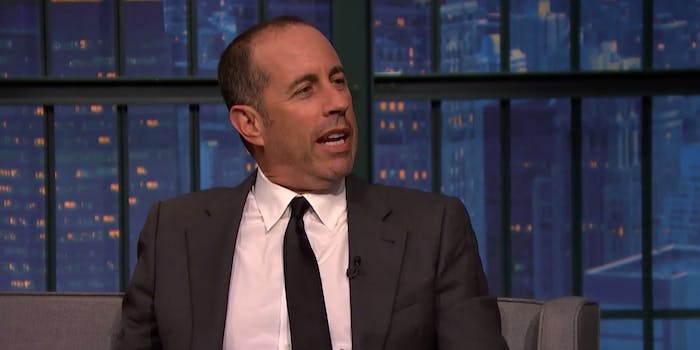 Jerry Seinfeld bemoans the death of comedy over political correctness

'They keep moving the lines in for no reason.'

Seemingly unfazed by the criticism on his comments about not performing at colleges anymore because “they’re so PC,” Jerry Seinfeld has once more talked about how the youth are too politically correct for comedy.

He defended his stance to Seth Meyers on Late Night Tuesday as he complained once again about how we keep moving the line of what’s offensive or sexist, which is getting in the way of lazy good comedy.

In a discussion with Meyers and New Yorker editor David Remnick, who’s also been called out for some of his covers, Seinfeld explained it’s no longer a young people thing when it comes to the line of political correctness. He recounted how his joke about a gay French king flopped during one of his shows, and they tried to figure out where to draw the line on Caitlyn Jenner monologue jokes.

Seinfeld is bemoaning the death of comedy because people are no longer finding offensive jokes funny.

“I could imagine a time where people would say ‘that’s offensive to suggest that a gay person moves their hands in a flourishing motion, and you need to apologize,’” he continued regarding the joke. “There’s a creepy, PC thing out there that really bothers me.”

Comedy is hard, you guys.