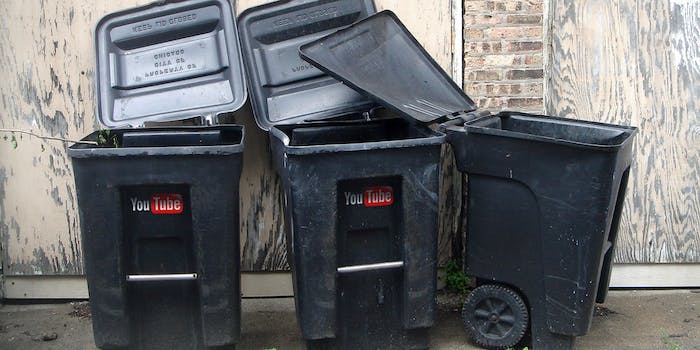 Jerry Seinfeld trashes YouTube as ‘a giant garbage can’

For a quick-witted star, Jerry Seinfeld has said some really dumb things over the years.

For a quick-witted, enormously wealthy star, Jerry Seinfeld has said some really dumb things over the years.

We remember Seinfeld’s inane comments about his brush with Scientology and his totally off-base remarks regarding his self-diagnosed autism. His latest bout of sneaker-stuck-in-mouth disease comes courtesy of a comment Seinfeld made at Crackle’s upfronts. When asked about the role user-generated content will play in the future of entrainment, the comedian answered:

“The less the better. I don’t want to see this crap. We have a giant garbage can called YouTube for user-generated content. We’re trying to generate a little higher level. I think show business is for talent, that’s who should be in it. But let’s keep it in its hierarchy. And I like being at the top of the pyramid.”

This from the man who not only made a king’s ransom from a show about nothing, but chose to have YouTube star Miranda Sings on the most recent season of his Crackle webseries, Comedians in Cars Getting Coffee. Maybe this is Seinfeld’s way of admitting that episode should be put out to pasture, much like his sitcom’s misguided view of the Puerto Rican Day Parade.

One thing Seinfeld has proven is his ability to get himself out of sticky messes… for the most part.

He was able to pull off the roommate switch,

discover who was leaving him racy messages on his tape recorder,

find out the name of a woman from an AIDS walk volunteer list,

and stake out a potential date in an office building lobby.

But he was not able to extricate himself from violating a good samaritan law.

Chances are, his comments about YouTube being a garbage can will only result in comedic fodder for his act, just like everything else. An act which, of course, you’ll be able to watch on YouTube.