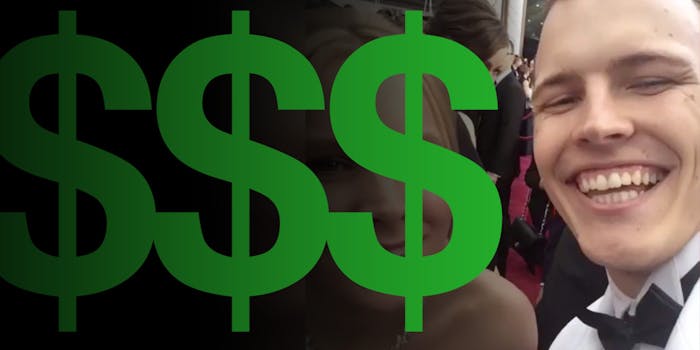 But not all is as it seems.

Jerome Jarre has come a long way. Coming from a poor, one-parent family, the 24-year-old Frenchman is now the undisputed king of Vine—a social media aficionado who’s 6-second hijinks have netted him more than 7.5 million followers on the looping video platform.

A new video released by Jarre reveals that prior to Vine, he wasn’t in a good place. But a chance encounter and a few choice words inspired him to turn his life around, and the rise of Vine has seen him achieve things he never imagined. After moving to New York a year ago, big business has finally come knocking, with a seven-figure offer for the star—but Jarre’s still not happy.

Of course, the more cynical among us might point out that a million dollars isn’t actually all that much in the showbiz world—and high-profile Viners can already make in excess of $30 thousand per single sponsored Vine. At that rate, Jarre would have to make less than 3 Vines per month—under 18 seconds—to earn his millionaire status. Jarre also operates his own social media agency, GrapeStory, so it’s questionable as to whether he ever truly intended to go through with the unnamed advertising company’s deal.

Regardless, it’s hard to argue with Jarre’s message—that you have to seize every moment and live it to the full. Just imagine… you’re 99 years old and you’re on your death bed. All of a sudden you have a chance to come back to right now. What would you do?