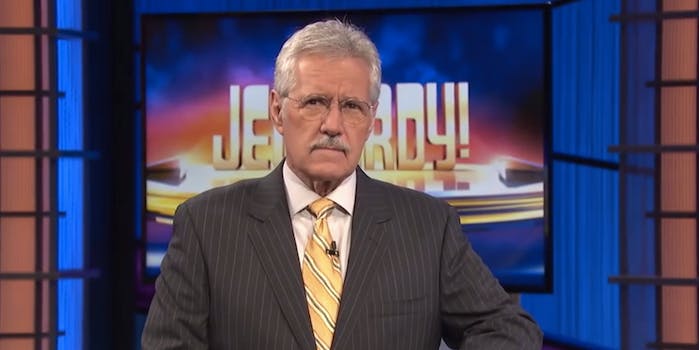 Oh, Trebek, how you've disappointed us.

I love me some Jeopardy!. I watch it all the time and shout out all the answers even if I’m in public. I do the online tests every year. And I even have a photo of a young, buff, shirtless Alex Trebek as my desktop background. But you know what I don’t love? I’ll take “casual misogyny” for 300, Alex.

Earlier this week, viewers on Twitter took the game show to task when it introduced the category “What Women Want,” including such clues as “Some help around the house; would it kill you to get out the Bissel Bagless canister one of these every once in a while?” The answer: “What is a vacuum cleaner?” … because ladies be nagging their men to clean all the time and stuff.

Granted, this isn’t the first time Jeopardy! has been accused of sexism: Earlier this year, Trebek caught flak for suggesting that women are less likely to win big on Jeopardy! “because they figure, ‘Oh, this is the household money, this is the grocery money, the rent money’” when wagering on the Daily Double. as Death + Taxes points out, it’s fairly common for Trebek to express faint bemusement whenever lady contestants get tough questions right, as if they were cats getting up on their hind legs. Look, how cute, they think they’re people.

But this particular category crossed the line for many viewers, who took to Twitter to express their displeasure:

.@Jeopardy? For a “smart” show, you just got srsly stupid RT @DJRumspringa: ARE YOU SERIOUS @Jeopardy?? pic.twitter.com/LEZcSw8K5A #SexismIsUgly

Come on “Jeopardy,” so you know what women want? Guess what I want? Not to watch again. This is 2014, get with it.

That’s right #Jeopardy. I’m a woman — and all I want are jeans that fit and a really good vacuum cleaner. #seriously #sexismlives

#whatwomenwant Not for national television shows to be sexist? @Jeopardy

#whatwomenwant What is equal pay? What is the right to make my own health decisions? What is treated like a human? @Jeopardy @SophiaBush

Neither Jeopardy! nor Trebek (nor Trebek’s mustache) has issued an apology. Now if you’ll excuse me, this lady is so frustrated that she’s gonna rev up her Bissell and angrily clean her house for a few hours.