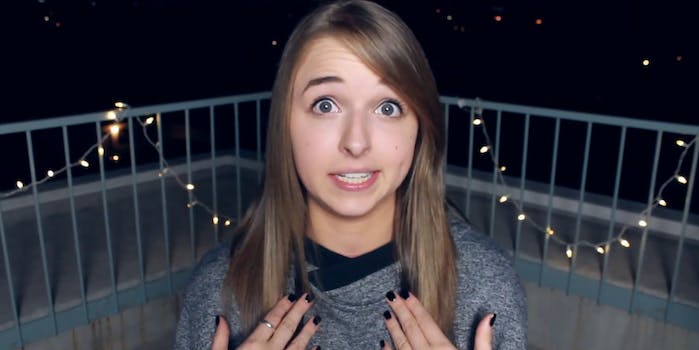 OurTime.org, one of the nation’s largest voter empowerment organizations targeted at young voters, partnered with YouTuber Jenn McAllister, better known as JennXPenn, to apply her popular top 10 format to a video about the joys of being 18 and how voting is one of the many things you can engage in once you cross the threshold into adulthood.

“Through using YouTube I’ve been put in this position where a lot of people look up to me,” McAllister told the Daily Dot. “I have the ability to talk about whatever I want to talk about. I think it’s good for me to talk about issues like this because I think it’s important, and a lot of my viewers are around the same age as me, or a little bit younger, so it’s something that’s going to be coming up soon. So I thought I’m in a good position to talk about it.”

In the video, she lists several other, more scandalous things you can do at 18, including playing the lottery and getting a tattoo, as well as registering to vote. McAllister, is newly 18 and registered to vote, says she gets her political information from a mix of traditional media and the new media where she makes her living as part of Fullscreen’s network of creators.

“I actually watch the news a lot; it’s something I kind of have playing in the background,” she said. “And of course there’s so much information in your fingertips on the Internet. It gives you a way to stay informed and gives you a way to come up with your own stand on [issues].”

Matthew Segal, the founder of OurTime.org (not to be confused with OurTime.com, the dating site for seniors), says partnering with pop culture figures and social media outlets is key to the site’s mission of reaching young voters where they live.

“Fewer spokespeople elicit more trust and authenticity than YouTubers like JennXPenn,” he told the Daily Dot via email. “It’s my prediction that more and more political entities will reach out to YouTube stars in the future because they have a greater capacity to mobilize audience online than many traditional celebrities do.”

YouTubers have lent their voices to politics in the past, like when several influential creators met with President Obama at the White House and developed videos about health care registration, a video that won a Streamy this past summer. Segal says smart and talented young creators like McAllister are a natural alignment for organizations such as his, and that he is confident audiences will respond to YouTube spokespeople about social and political issues.

“Millennials are one of the most socially-conscious generations in history and apathy, to us, is a turnoff,” Segal explained. “We also know that YouTubers like Tyler Oakley and Laci Green have galvanized tremendous audiences around issues such as LGBT rights and feminism. Social and political issues drive engagement.”