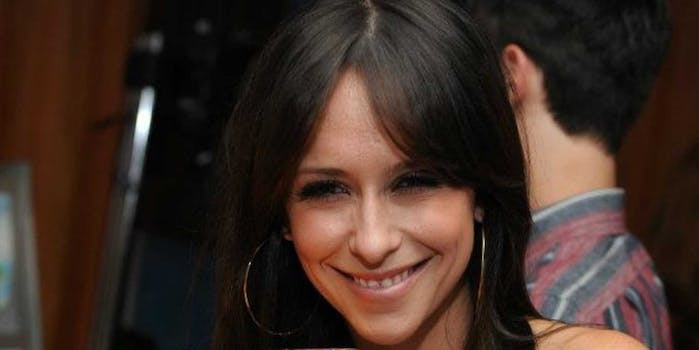 The Client List actress, who is engaged and expecting a baby, is done with Twitter's "bad vibes."

Jennifer Love Hewitt announced she was leaving Twitter on July 3, citing the site’s tendency to attract “negativity” as the reason for her departure.

Unfortunately with all the negativity people choose to send on twitter as well as threats to there own well being. I’m sad to say twitter is

No longer for me. I have enjoyed all the kindness and love that came my way, as well as support. But this break is needed.

Thank you from the bottom of my heart.

Hewitt, who has appeared in the TV series Ghost Whisperer and Party of Five, currently stars on the drama series The Client List. The 34-year-old actress recently got engaged, and she and her fiancé, fellow Client List actor Brian Hallisay, are expecting a child together. She did not cite specific examples of the “negativity” or “bad vibes” she has endured on Twitter.

Hewitt neglected to delete her Twitter account altogether, possibly indicating that she may one day decide to return to the service. She leaves behind over 600,000 followers.

Hewitt’s fans were quick to react to the announcement.

@TheReal_Jlh Don’t leave! We love you!

@TheReal_Jlh I’m sad to see you go,but I understand. Congratulations & best wishes to the future! #talkhard

Some Twitter users, however, exemplified the very negativity that Hewitt spoke of in reacting to the actress’ departure.

Jennifer Love Hewitt is quitting Twitter. Our long national nightmare is over, or something.

Hewitt is far from the first celebrity to quit Twitter due to harsh words from its users. Just last week, actor Alec Baldwin left the service (again) after calling out a Daily Mail reporter who criticized Baldwin’s wife’s tweets at actor James Gandolfini’s funeral.

In June 2012, British soap star Shobna Gulati quit Twitter because of racist tweets directed at her, and in May 2012, Game of Thrones writer Bryan Cogman bowed out after fans sent him angry tweets and threats.